Mustang quarterback Tyrone Wilson looks for an open receiver in the Mustangs 19-9 loss to Silsbee in the Regional finals in New Caney.

West Orange-Stark’s bid for a fifth straight trip to the Class 4A state championship game came up two wins short with last week’s 19-9 loss to Silsbee in the Region III finals.

The 2018 team lost back-to-back games for the first time since 2014 and its 9-5 final record included the most losses for WOS since 1994 and the fewest wins since 2010, the year before Cornel Thompson took over as WOS head coach.

“We did some good things,” reminded Thompson, who has 100 wins to go with only 17 losses as Mustang boss. “We made it to the fourth round for all eight years I’ve been head coach. We played our 500th game, becoming the winningest team (all-time win percentage) in state of Texas.

“We did fall short of winning 10 games, but we have some things to be thankful for. It wasn’t a complete flop this year.”

Many say this was Thompson’s best coaching job.

And to that assessment, Thompson doesn’t disagree.

“We probably got all the milk out of that cow we could probably get out,” the coach said.

“That group we had we probably overachieved.

I thought my coaching staff did an outstanding job getting what they got out of our football team. It was probably the hardest year as a coaching staff that we’ve had in the last four to five.”

After graduating 21 seniors from the back-to-back state champion squad in 2016 and graduated 18 more from the 15-1 state runnersup in 2017, the list of experienced players was short going into this season.

“Most of our people that played this year didn’t get much playing time as juniors. When you have to bring freshmen up to play on the varsity level, then you have some inadequacies in your juniors and seniors,” Thompson said.

“We had some average players. We didn’t really have a bellcow.

“I thought we could win 10 games this year, but we won nine of our 14. I’m thinking winning nine games, we had a good year. But we probably should have won that last one.”

WOS fumbled four times and lost three in last Friday’s rematch between District 10-4A champion (WOS) and 10-4A runnerup (Silsbee) at Texan Drive Stadium in Porter.

Playing much of the night in a deluge of rain, the Mustangs finished with only 176 total yards, averaging just 2.8 yards per play.

“It was wet on both ends,” Thompson said.

One who didn’t seem bothered by the wet weather was freshman running back Elijah Gales. He gained 93 yards on nine carries. He also scored two points by returning an unsuccessful Silsbee extra-point and had his own first-half fumble returned for a Silsbee score. 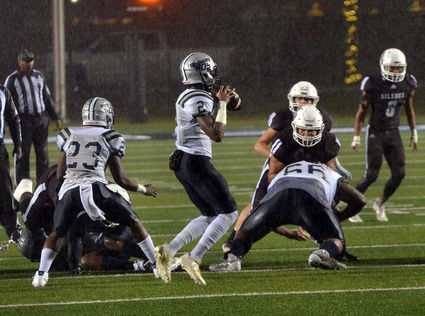 Gales and lineman Demetrius Hunter were freshmen who played for the varsity this year.

They are expected to help christen a renovated Dan Hooks Stadium complete with artificial turf next fall.

“They’ll be coachable, guys who enjoy playing the game. I’m looking forward to next year.”