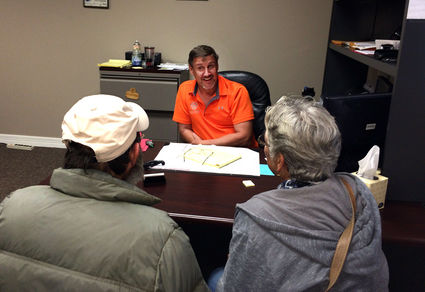 Mark Hammer, center, Director of Veterans Services for Orange County, visits with Vietnam vet Eugene Force of Orange and his wife on a recent morning.

Mark Hammer has the greatest job most people have probably never heard of.

He’s Orange County’s Veterans Services Director. His office is located at 10984 FM 1442, not far from the Expo Center, and is open for drop-ins or appointments from 7 a.m. to 5 p.m. Mondays through Thursdays.

Veterans Service Offices assist veterans and their dependents with applications for compensation, pensions, hospitalization and other benefits.

“We help with compensation for anything that happens in the military,” said Hammer, a Marine Corps vet himself.

The county office serves as a go-between with the Department of Veterans Affairs and other nationally chartered veterans service organizations.

“I love doing this job,” Hammer said. “It’s got its ups and downs, but most of the time it’s fun. I like helping veterans and older people. Widows need a lot of help.”

Hammer said he had never heard there was a Veterans Service Office in every county in Texas.

“It was pure coincidence,” Hammer said. “My wife worked in a dental office and met a man who used to work here, and he told her about it and mentioned he was planning to retire.”

That was about six years ago, the time Hammer has worked for Orange County. But mostly, he works for vets.

“If they have any problem of any sort with the VA (Veterans Administration), we try to help them out,” he said. “My biggest concern is getting people signed up for medical and mental health care.

“Hearing aids are a big need for veterans. We can get them glasses.

“The big thing is PTSD (Post Traumatic Stress Disorder). We didn’t used to have that diagnosis. Vets used to come home, put their head down and go to work – or go drink.”

Hammer says the armed services are doing a better job of preparing veterans for their time after service.

“A lot of guys coming out of the military get classes on how to adjust,” he said. “But the military doesn’t tell you everything.