BC Couple adds sparkle to Christmas 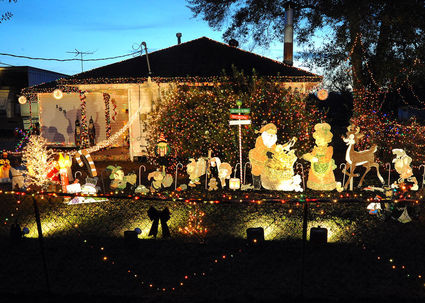 Jerry and Rose Wilson's outside decorations began with four elves, Santa and Mrs. Claus and of course Rudolph. Their one of a kind dazzling display can be seen at 155 Farm Drive in Bridge City.

For more than 30 years Christmas cheer has been overflowing at the Wilson house.

Jerry and Rose Wilson's outside decorations began with four elves, Santa and Mrs. Claus and of course Rudolph. Over the years, they have added to their display to where it is now. If a piece is retired, then it is replaced with something else. The latest addition includes two nutcrackers and a melted snowman.

A favorite of the Wilson grandchildren are the carolers and Mickey Mouse and his gang in a stage coach.

Each piece of the display is made by Jerry Wilson. He finds his inspiration from coloring books and Christmas cards. Most of yard ornaments are handmade with the exception of only a few such as the metal pieces. His pieces have become quite popular and are all over Southeast Texas because of the frequent requests he receives.

Wilson draws them out with the help of an overhead projector. He then paints them and for that special sparkle, they are covered in glitter. The final step to ensure they stay beautiful for years is to spray them with a sealant.

The yard decorations are not the only thing lit up, so is the house. Thousands of lights are on the house and like decorating a tree, it would not be complete without a star on top. So, they have put a star on the roof.

In addition, they have speakers outside playing Christmas music from a CD player inside the house. They have a large selection of CDs, but the Chipmunks are a favorite.

Jerry Wilson begins setting up the display around Thanksgiving. Not only is he decorating outside, but inside as well. Inside, he begins by moving some of their furniture out to make room for the Christmas Village with the hundreds of pieces. These include a carousel, houses and much, much more. In addition, there is a large Christmas tree full of glowing lights too. It also has a train set on the tracks circling the bottom. But, this all began with a Nativity Scene under the tree more than 30 years ago. It is still carefully placed there every year too.

For Rose Wilson, she loves putting her angels out for decoration. She collects angels, but has special angels for the holidays she displays.

Once Jerry Wilson begins the process of putting up the lights outside, he checks them thoroughly to make sure they are ready to twinkle and shine.

Once dusk sets in, the true test is when it all comes to life.

"Mainly we do it for the kids," Jerry Wilson said.

After the Christmas holiday is over, then they are taken down and put away. But, the Wilsons also decorate for Easter and Halloween. Rose Wilson is hoping her husband will also make yard ornaments of cupid shooting arrows for Valentine's Day.

The Wilson's dazzling display can be seen at 155 Farm Drive from dusk until about 10 p.m.