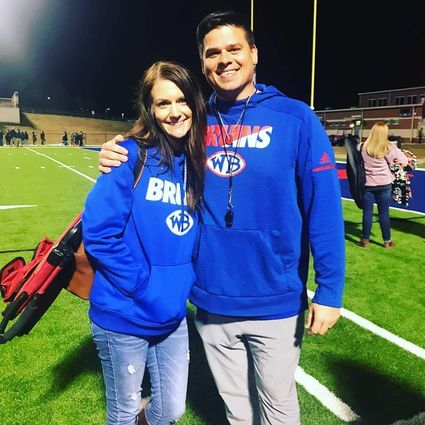 The West Orange-Stark Mustangs will be missing from Texas Football State Championship Weekend for the first time in five seasons.

But not Orange County.

The game will be televised by FOX Sports Southwest.

Flanigan had been Peevey’s Orangefield head coach when he was a two-way lineman for the Bobcats nearly 20 years ago.

But the Peevey-Flanigan relationship extended far beyond that. And there’s no getting away from those Orange County roots.

“The school I went to, Orangefield, I think really prepared me for my future,” Peevey said. “Even though I’m in Beaumont, home is home, and you’ve always got that orange blood flowing through you.”

Kevin Flanigan has been a huge influence, the Bruin coach said.

“I graduated from Orangefield in 2002 and Coach Flanigan asked me what I wanted to do,” Peevey recalled Tuesday.

“I told him I wanted to be a football coach. He told me to go to Lamar and get my bus driver’s license.”

While he attended school at Lamar-Beaumont, Peevey was a full-time employee of the Orangefield school district.

He drove students to and from school in the mornings and afternoons and was a student-coach at Orangefield all while commuting daily to Beaumont for college classes.

“Every morning, I’d drive the school bus, then coach football during athletic period and go to Lamar,” the Bruin coach recalled.

“I’d help coach in the afternoons and then wait tables at Tuffy’s. On Friday nights, I’d go break down film after the games.

“It was a very busy four years – a great learning experience. Coach Flanigan really helped me through this process. That was really a huge part as a young kid.”

As a college graduate, Peevey has been on Flanigan’s coaching staff at Orangefield, Crosby and West Brook. He also coached for three years on the staff of Randy Crouch at Little Cypress-Mauriceville.

This is Peevey’s seventh season at West Brook, where he was Flanigan’s defensive coordinator from 2014-16.

“When coach Flanigan got the job here at West Brook, I jumped right on board,” the Bruin head coach said.

West Brook, playing in the post-season for the fifth year in a row, is 13-2 and enjoying its most successful season since its first, in 1982 when the Bruins became the first non-district champion to win a state title.

West Brook was only a few months old then, formed by the South Park school district’s consolidation of Forest Park and Hebert high schools.

This year’s Bruins are also runnersup, finishing behind Galena Park North Shore in District 21-6A. North Shore is playing Duncanville in the 6A Division I finals Saturday night.

Longview, No. 4 and the top-ranked Division II team in the last Associated Press Prep Poll, is 15-0.

“We’re one of the smallest 6A schools in the state; we have 2,260 students compared to 4,500 for North Shore. We consistently play schools that have double our enrollment,” Peevey said.

The Bruins, unranked by the final AP poll, knocked out No. 8 Austin Westlake 35-30, behind the big plays they have become known for.

Their four touchdown plays averaged 61 yards against a Westlake club giving up only seven points per game.

“It’s awesome to go to a game in Katy, and you’re playing Austin Westlake, and Orange County people are there rooting you on,” the coach said.

“There were hundreds of people from Orange County. That shows how football can bring people together.”