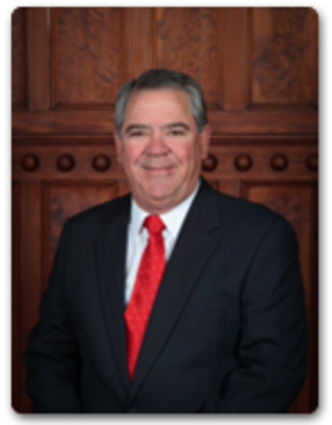 Gene Bouillion has been director and CEO of the Orange County Navigation and Port District since 1998. He has announced he will retire in March.

A search will begin in January for a new port director in Orange after Gene Bouillion recently told Orange County Navigation and Port District commissioners he intends to retire in the spring.

Bouillion has been director and CEO of the port since 1998, overseeing a $2 million annual budget, and during that time has seen the port’s reserve funds balance increase from $2.5 million to $12 million.

The native of Crowley, Louisiana, lost his home in the 2017 flooding caused by Tropical Storm Harvey. Bouillion has commuted from temporary quarters in Lake Charles since.

The wear and tear of the commuting speeded up plans for the 66-year-old and his wife of 44 years, Cheri, to retire to Cypress, Texas, a northwest suburb of Houston, to be near their daughter and grandchildren.

“Hurricane Harvey was a big part of my decision,” he said.

“Our house flooded with three foot of water. We had insurance, so we were able to sell it and buy in Cypress.

“It was an economic decision, plus my age,” Bouillion said. “The time had come.”

“Gene’s a good man. I hate to lose him,” Wallace said. “I think we’ll find somebody good, but it will be a hard search, after not having to worry about it for so long.”

Wallace said it was appropriate for Bouillion to serve on the search committee for his own replacement.

“He should be on the search committee. We’ll need him to help,” said Wallace, a port commissioner since 2006. “And he’s agreed to help us if we need it, because he’s not going to another job.”

A graduate of the University of Southwestern Louisiana in Lafayette, Bouillion worked in rice exporting at the Mississippi River port of New Madrid, Missouri before coming to Orange.

He and his wife plan to split their retirement between their fishing camp on Toledo Bend Reservoir and their new home Cypress.

Bouillion said in an interview earlier this year that because of the growth in the size of ocean-going ships since Orange was a national shipbuilding leader 50 to 100 years ago, he always considered “the Port of Orange was more of a barge port rather than a shipping port.”

He said the Sabine River would need to be dredged 10 to 15 feet deeper and cut 200 feet wider to accommodate the same vessels that berth at the Ports of Beaumont and Port Arthur.

“It’s not cost feasible,” he said. “You’re talking about billions and billions of dollars.”

The Orange port has five berths being rented to companies to fleet and outfit their barges there. Two of the tenants, Bloodworth Marine, and Sienna Marine, each employ between 75 and 100 workers, Bouillion said.

Besides jobs, the tenants provide the port rent payments and other dockage fees that make up about $1.6 million of the port’s $2 million in annual revenue.