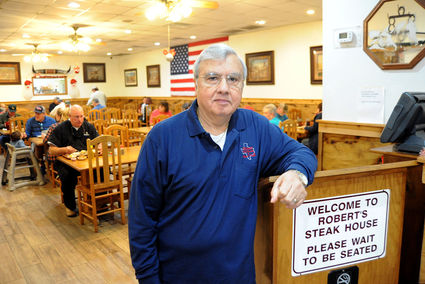 John Wayne once said, “When you stop fighting, that’s death.”

The folks at Robert’s Meat Market and Steakhouse know about fighting tough odds.

And judging by the decorating scheme at Orange’s largest restaurant, they’re all well-acquainted with the Duke and his always appropriate set of values.

“Loyalty,” is the word owner Robert Ramirez came up with to describe the teamwork needed to bring the Orange institution back to life after Tropical Storm Harvey in 2017,

“because they stuck with us until we got through it.”

This holiday season, as the full- and part-time staff of 52 celebrates the end of 2018 and looks forward to the New Year, they can be proud of the spirit they all showed in fighting back from Tropical Storm Harvey.

“We have a lot of long-tenured people here, and to me that says a lot about Mr. Robert,” says Tina Myers, a Robert’s employee for 38 years.

The floors, walls and ceiling all had to be replaced. The business was closed for three months. But it would have been much longer if Ramirez had to wait on contractors sent by his insurance company.

“The employees and I did all the work,” he said. “We all pulled together and got it done. The only thing we hired out was the flooring.

“The guys did all the sheetrocking and the girls did the cleaning and painting. A lot of cleaning.”

Myers recalls the pulling together. “We cleaned, stripped and varnished all the tables in the restaurant – about 300 – and all the chairs.

“We lost a few employees that had to relocate,” she said, “so there were about 30-35 of us at the time, and we didn’t want to be out of work for a long time, so we pitched in.”

Ramirez said insurance was a blessing.

“Insurance took care of me, so we used our own money to get everything.”

“We had a contractor come look at everything to make a bid,” Myers said. “But he never showed up again.”

The biggest change at Roberts during its reconstruction was trimming the size of the meat market a bit and creating a new dining room.

Robert’s now has seating for 650 in six dining rooms, one of which includes a full bar for parties.

Lions Club, Rotary and sometimes Kiwanis clubs meet at Roberts. There’s a Wednesday Lunch Bunch and a Wednesday Supper Club. The Greater Orange Area Chamber of Commerce meets there as do Special Angels, a car club and a gun club.

“Being so big helps us,” Myers said. “We’ve had 30 people walk in the door together, and we sat them all together.

“A week ago, somebody from Leesville, Louisiana, called on a Saturday night, right after we’d been slammed, and asked if they could eat here on their way home from a baseball tournament in Houston.

The menu features “everything from a hot dog to steak and lobster,” Ramirez said. Beside steaks, Mexican, Cajun and seafood are popular entrees.

Ramirez is a native of Brownsville, Texas, who worked with Weingarten’s grocery store in Houston before coming to Orange in 1970 to work for Gerland’s grocery stores.

He opened the first Robert’s Meat Market on Simmons Drive in 1980. A decade later he moved the operation to the current location.

“It’s been good,” Ramirez said. “We are blessed, truly blessed.”