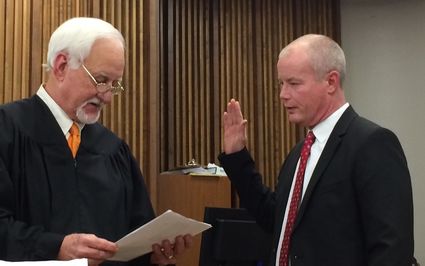 In a courtroom filled with judges and local lawyers, Orange native Steve Parkhurst officially left one group to join another.

Parkhurst was sworn in as Judge of the 260th District Court at the Orange County Courthouse Thursday, Dec. 20 by the man he’s replacing, Judge Buddie Hahn.

“One thing I’m glad about,” Parkhurst said. “At least for a while, I may not have to suffer through any more lawyer jokes.”

Then he told a judge joke.

Judge Dennis Powell of the 163rd District Court said he predicted soon after Parkhurst began to practice law in Orange more than 20 years ago that this new lawyer was special.

“Steve was a difference maker as an attorney and he brought pride to the profession. And he brought a better community to Orange County than he found,” Powell said.

“As he did as a lawyer, he’ll bring pride to the judiciary and make our town a better place.

“I’m losing a good friend across the hall in Judge Hahn, but I’m proud to call Steve a friend. I look forward to my judicial friend taking a place across the hall.”

Hahn was the second judge to sit on the bench in the 260th District Court, serving 35 years.

After Parkhurst won November’s general election without a primary or general election opponent, Abbott appointed Parkhurst in November as interim judge. He will fill the unexpired term of Hahn, who “officially” retired at the end of June but since has been working several days a week as “visiting judge” in his longtime courtroom.

Parkhurst’s interim tag will last only 10 days, with all officials elected in November starting their terms Jan. 1.

Parkhurst thanked all in attendance and when he called a partial roll of the lawyers gathered before him, gave special praise to Tommy Gunn and David Dies.

He called Gunn, the man he practiced law with after his 1996 graduation from South Texas College of Law, his “mentor.”

He recalled seriously his first appearance before the Texas Supreme Court, with Dies, his longtime law partner. Then he told a funny story about the private plane ride home after winning their appeal.

“I think we can all agree that justice is the basis of human life that the Lord gave us,” Parkhurst said in remarks after taking the oath of office from Hahn and being helped into his new robe by sons Brac and Kai Parkhurst.

“I believe the civil and criminal justice system we have in this country is the best in the world and will remain so as long as we have jurors who show up and judges who take their readings seriously, let people have their say and make a decision.

“I think everybody here is part of that system and we have to continue to make this better.”

Swearing in ceremony for Orange County elected officials will be held at 2 p.m. Tuesday, Jan. 1, at the 128th District Courtroom in the Courthouse, 801 Division St., Orange.