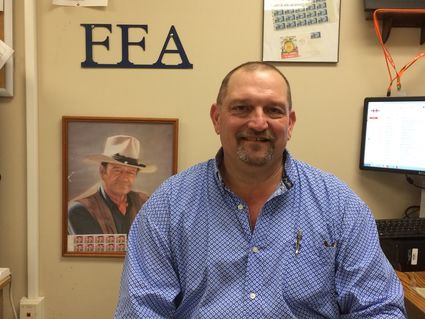 Chad Jenkins got the Christmas present he was hoping for.

Jenkins will be wearing it on New Years Day when he takes his oath of office as Orange County Precinct 2 Justice of the Peace.

And he’ll wear it, hopefully, for many years to come.

The ceremony for the county’s newly elected officeholders will take place at 2 p.m. Jan. 1 in the 128th District Courtroom in the Orange County Courthouse.

“I’ve been shadowing Judge Dunn, trying to learn the ropes,” Jenkins said. “The other JPs have been a big help, but Judge Dunn has done a tremendous job.

“He really took me under his wings.”

This will be at least the second time Derry Dunn has welcomed Jenkins to a new job.

Before becoming Precinct 2 JP on Jan. 1, 2003, Dunn spent 30 years as an educator. He was principal at Little Cypress-Mauriceville when he hired Jenkins for his first teaching job.

Jenkins was the only one to file for the job. He won the office without having to campaign in either the primary or general elections.

But Orange County’s gain will be Orangefield High School’s loss. He worked 25 years as agricultural education teacher there.

His peers had the photos to prove it at a surprise going-away party held by fellow teachers and administrators. When you add in Jenkins’ family and non-school friends, there were more than 100 folks gathered to salute him at the Orangefield cafeteria Dec. 19.

“I retired after 25 years at Orangefield, 27 in all as a teacher,” Jenkins said. “It’s bittersweet, to be truthful.

“It was a nice little shindig they threw for me. It caught me by surprise.”

Jenkins has already squeezed in one round of the three judge training sessions required by the state of Texas.

He’ll go back to Austin for more in January and April.

Jenkins will start his new job Jan. 2. His plans for that day are to get to know his staff “a little bit better.” And there are afternoon hearings.

“I’ll try to get used to everything.”

Jenkins does have some experience with his job. Along with teaching five ag science classes a day, he served as truancy prevention officer for the Orangefield school district for the last eight years.

That frequently drew him to Dunn’s courtroom.

“I can honestly say I never regretted a day going to work.”

The youngest of Jenkins’ three boys is a sophomore at Orangefield High. Windee works for the district with special needs students.

Jenkins won’t be moving his home, just his office.