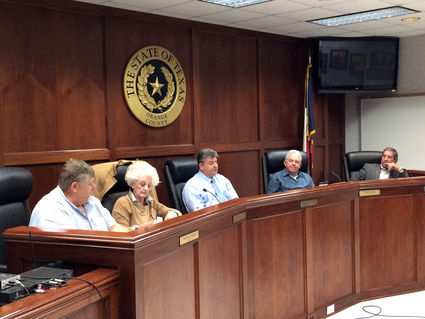 The Orange County Commissioners’ Court cast of 2019 debuted Wednesday morning, Jan. 2, and turned down $177,000 in free money to fix the courthouse.

The courthouse’s front entrance has been closed for three years after pieces of marble near the top of the three-story front wall broke loose and fell.

Crooks said they found a better way to fix the courthouse front, hopefully by mid-2019.

“We don’t want another Christmas where we have to decorate the scaffolding,” Crooks said. “I’m tired of that scaffolding.”

Beauchamp becomes the third female to serve as county commissioner in Orange. Her mother, Marcelle Adams, was the first, Sue Bearden the second.

“Everybody knows I want the courthouse fixed,” Beauchamp said.

“This is the county seat of our county and it is a joke. Definitely it needs to be repaired as quickly as possible.”

Crooks and commissioners reminded free money is never really free; they said there were too many strings attached to the 50-50 grant.

Taking the money, which would require a $177,000 match by the county, would also require the county to grant an historical easement to THC.

“Their job is to make things historically accurate and preserve it for the future. It’s a good thing. But that can make things a lot more expensive.”

Viator, the former Vidor mayor, said he had worked with the Texas Historical Commission in the past.

“You have to restore to the original, and to get somebody who does that kind of work, like they did in the 1930s, is expensive,” Viator said.

The good news is that by letting Beaumont architect Don LaBiche run the project instead of THC may cut the cost by 50 percent.

“We found a way to do it for what we were going to pay for our half of the grant, so there’s little reason to enter into an easement with them,” Crooks said.

Kurt Guidry, county maintenance director, recently unearthed original blueprints of the courthouse, a development that should save a lot of money, he said.

He said work could begin by March and be completed by the summer, barring weather delays.

Last July, former Commissioner Barry Burton brought together representatives of THC and two engineering and architectural firms to a workshop for commissioners.

Burton, Guidry and other county employees had worked with them to develop a “master plan” for the courthouse, necessary before applying for THC grants.

Brett Barr of THC announced the emergency grant approval, calling it the best first application he’d ever seen, then predicted work could be completed by the end of 2018.

All the county needed to do was sign the contract.

In the Oct. 10 commissioners’ court meeting, Diane Gremillion, the court’s legal advisor, said she had “seven or eight problems” with the easement, “the amount of control we’re giving up.”

Burton then countered that 93 of 102 eligible Texas counties had signed the document agreeing to the easement.

In other county business Wednesday, commissioners approved paying $370,000 in weekly bills and heard that sand and sandbags were available at the Precinct 3 barn on FM 1442 and the Raymond Gould Community Center in Vidor for people affected by recent rains.

Orange County Disaster Rebuild will hold a Hurricane Harvey Outreach Event Saturday for people who still have unmet needs as a result of the 2017 storm.

The event is from 10 a.m. to 4 p.m. Saturday at the Orange County Convention and Expo Center on FM 1442. Disaster case management registration, Red Cross case managers, representatives of the Texas Homeowner Assistance Program and other organizations will be on site.