As the new year starts, about 45 percent of Americans will make a New Year's resolution. As the months move forward, the number of people keeping them drops with each passing month. Most will resolve to lose weight, stop smoking or exercise more.

James Scales, of Bridge City, is offering a solution for a successful new year for all and to keep those resolutions by choosing to make the community a better place.

"We are always looking for donations and volunteers," Scales said.

James is the middle child of Jimmy and Donna Scales. His parents were dedicated to their family but also the community too. Therefore, the apple doesn't fall far from the tree as their three children were raised to follow in their parents footsteps in caring and giving to others.

“When the kids were little I was involved in all the sports, on all the boards,” Jimmy Scales said during a previous interview before his tragic death.

“It’s something that is very rewarding. My mother taught Red Cross swimming for 40 something years and when she passed away I decided to carry on the tradition.” Jimmy said during a previous interview.“Our parents instilled in us to give back to the community. You don’t just take, take, take. You try to give back what you can. That’s what makes small communities work well. If everybody does a little bit, then it’s not a big load on anybody."

James Scales reached a point in his life a few years ago and decided it was time to kick things up a notch or at least several notches. He is currently the fundraising chair person for Orange County Disaster Rebuild which aids people in getting things they need such as flooring and sheetrock to get back into their houses after Hurricane Harvey. James is also the treasurer for Helping On Purpose Everyday and is the Vice President of Better Living for Texans.

All three organizations are non-profits and survive on grants and donations in order to help others.

Recently the OC Disaster Rebuild organization held a "Taste of the Holidays" event and sold 350 tickets. Attendees ate from 25 vendors who represented restaurants in Orange County. It was a delicious, fun and exciting night for all. The proceeds from the event will help organizers help more people.

Plus, about two weeks before the Thanksgiving holidays, James and a team of volunteers gave away 400 turkey dinners with all the trimmings in about a 90 minute span. All the recipient had to do was drive up and the dinner was placed into their vehicle so they could take it home and prepare it. For many, this was a welcome meal.

James' favorite annual event is the Kids Cooking Camp. The week long event hosts about 60 children ages 8 to14 years old. They meet for four hours to introduce food and basic skills. In the end they prepare food for their family to come share with them. Sign-ups are in May. Spaces are limited and quickly fill up. Through donations, the costs of the program have been brought down significantly, James said.

"It really puts a smile on your face," he said of the children and their experiences.

A cause that will always be close to his heart is the Bridge City Chamber of Commerce golf tournament. The tournament was renamed after his father to the Judge James B. Scales Memorial Golf Tournament to honor the man who loved supporting his community and golf too.

Most recently James was involved with a meat canning class through the HOPE organization. 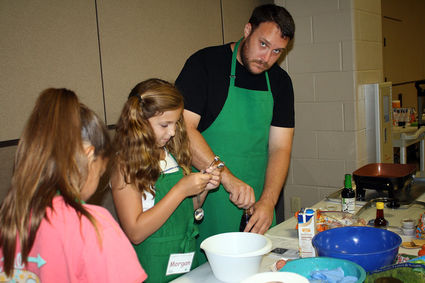 "Instead of jams and jellies, we did meat," James said.

Other classes James is involved in through HOPE is sewing classes for both adults and children.

More information on the events can be found on the Orange County Agrilife Extension Facebook page.

James is planning for a busy year in 2019 and hoping the new year will see more people wanting to do more for their community too.