What a way to welcome a new year!

Seven of the 11 county office-holders elected in November repeated their oaths of office Tuesday, Jan. 1 at the Orange County Courthouse.

Friends and family filled seats of the 128th State District Courtroom as history was made.

With no Democratic opponent in November, Crooks was available to begin serving in May when Carlton resigned early.

“Thanks to Pete for doing this not once, but twice,” Crooks said. “Sometimes I think I’m wearing him out.”

Marcelle Adams was the first female commissioner in Orange County and one of the first in the state when first elected in 1986. She served as Precinct 2 commissioner from 1987 to 1994.

“This brings back a lot of memories,” Adams said Tuesday, recalling taking her oath of office in the same courtroom Jan. 1, 1987.

“I think Teesie will do a good job,” the 95-year-old said, using her daughter’s nickname. “If I hadn’t have thought that, I wouldn’t have wanted her to run.”

A retired schools administrator, Beauchamp was sworn in as the new Precinct 2 commissioner by Judge Buddie Hahn, the just retired 260thDistrict Court Judge of 35 years.

Precinct 4 Justice of the Peace Rodney Price, left, congratulates Precinct 4 County Commissioner Robert Viator after swearing him in on Tuesday, Jan. 2, at the Orange County Courthouse.

Former Vidor Mayor Robert Viator, elected for his first term as Precinct 4 county commissioner, was sworn in by Judge Rodney Price, the Precinct 4 Justice of the Peace.

Price, in turn, was sworn in for his fourth term by his nephew, Reed Galloway.

Hershel Stagner, Jr., receives the oath of office as Precinct 1 Justice of the Peace from his wife, Debra Stagner.

Newly elected Precinct 2 Justice of the Peace Chad Jenkins was sworn in by the man he is replacing, Judge Derry Dunn.

Hershel Stagner, Jr., receives the oath of office as Precinct 1 Justice of the Peace from his wife, Debra Stagner.

Precinct 1 Justice of the Peace Hershel Stagner’s wife Debra Stagner read him the oath. Stagner was a mid-term appointment in 2017. 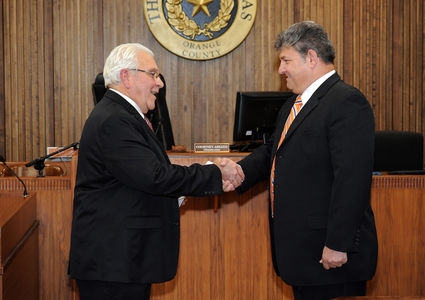 “I was appointed by commissioners’ court two years ago,” Stagner said. “This time, I was elected by the citizens of Precinct 1.”

County Clerk Brandy Robertson won her first four-year term in November but she had previously been appointed to replace Karen Jo Vance. Judge Troy Johnson of County Court At Law No. 2 swore her in.