In the Land of the Head Hunters Film Event 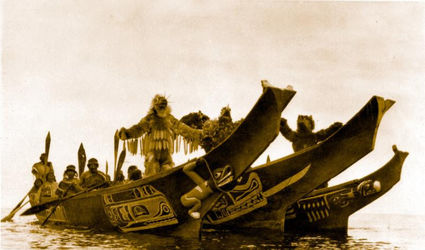 In the Land of the Head Hunters was one of the first feature films to cast an exclusively Native North American Cast.

The film is a melodrama depicting a story of love and revenge among the Kwakwaka'wakw people of British Columbia.

The program will feature the new archival restoration of the 65 minute film including a contemporary recording of the original 1914 musical score by the Vancouver-based Turning Point Ensemble.

Following the conclusion of the film, Sarah E. Boehme, Curator of Art, and Jennifer Restauri Dickinson, Curator of Education, will lead a discussion highlighting historical significance of the film.

The event will conclude with a light reception.

“We are inviting the public to view this restored version of Curtis’s film as a way to explore this artist’s incredible accomplishments, which were accompanied by disappointing failures. Seeing the film as Curtis intended, and yet having the opportunity to discuss it in hindsight, will be illuminating,” stated Boehme.

The program is free to the public and is offered in support of the special exhibition Lasting Impressions: The Work of Edward S. Curtis on view through June 8, 2019, at the Stark Museum of Art. For more information on the program or the exhibition, please visit starkculturalvenues.org.

Paintings, sculpture, prints and rare books interpret the West from 19th century frontier artists to the 20th century artistic colonies in New Mexico and focus on the stunning land, dramatic people and diverse wildlife of the American West.

Also featured is a significant collection of American Indian objects, including baskets, pottery, clothing and jewelry.