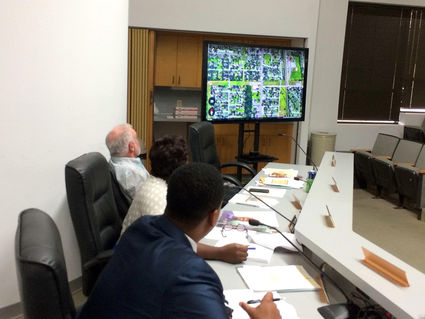 Photo: Orange City Council members look at a new 75-inch Smart TV presented by Interim City Manager Kelvin Knauf to replace an old projector used for council presentations. The new video screen easily interfaces with an array of other media sources. Knauf said the price tag was less than $1,500 and it was paid for from the Planning & Zoning director's salary, since Knauf's old position is currently empty. RECORD Photo: Dave Rogers

Council also agreed to join the cities of West Orange and Pinehurst in an interlocal agreement with Acadian Ambulance Service for emergency and non-emergency ambulance service.

It had final readings of ordinances approving an Economic Development infrastructure grant of no more than $50,000 to Spanky’s Bar-B-Que for new parking lots, and another to amend an ordinance to allow citizens to serve on more than one city board and commission.

The exception to the last would be Planning and Zoning Commission and the Board of Adjustment, since the latter rules on appeals of rulings by the former.

Tuesday morning’s meeting began with a presentation by

She explained the Center for Disease Control’s three-month visit to the area, one made conspicuous by four trailers parked in front of Baptist-Orange for the past two months.

“The bottom line,” Eklund said, “is your county is helping us see what health conditions will be like in the future.”

The council also agreed to an ordinance authorizing the city to participate in opposition to rate hikes sought by Entergy at the Public Utility Commission.

It re-appointed Edward Freiberg and appointed Isaac Henry III to the city’s Board of Adjustment.

Also, they voted to cancel the Feb. 12 city council meeting, because of a conflict with Golden Triangle Days at the state Legislature in Austin.