Photo: Workers for Allco Construction take care of some touch-up painting Tuesday at Orange’s new Richard Water Plant. Heavy rains have been a big part in the project running more than a year past its original completion date. RECORD Photo: Dave Rogers

The average annual rainfall for Southeast Texas is 60.47 inches, according to forecaster Rob Megnia of the National Weather Service Lake Charles office.

In 2018, it rained 88.75 inches here, Megnia said. That’s nearly as much as in 2017, when a five-day natural disaster called Tropical Storm Harvey was responsible for more than half of the 104.3 inches of rain recorded.

The bottom line Tuesday was that Beaumont’s Allco contractors got 271 extra calendar days to finish the new Richard Water Plant, a project that was to be completed about a year ago, Jan. 10, 2018.

And the much-awaited Boardwalk Grille, which was supposed to start construction February 1, according to an EDC tax abatement agreement, now has until May 1 to break ground at 5th and Division Streets and a proposed completion date of Nov. 1.

Owner Jake LeMoine asked for the extension “due to weather and other unforeseen delays.”

“Rain. It hasn’t stopped raining,” LeMoine said when asked why he needed the extension. “That and it took a lot longer to finish with the city [the EDC agreement]. We didn’t get to start working with the bank until just before the holidays.

“It’s been raining so much, it’s given me time to get the other stuff ready. But I wish it would stop.”

No one available at Allco Tuesday was authorized to speak to the media, but the company, in its request for an extension, showed that it had lost 51 days to rain in the period from June 6 to Dec. 15, 2018.

In Change Order No. 3, the city agreed to pay Allco an additional $47,000 to cover the electrical revisions.

And council also agreed to a third “additional days” request Tuesday, granting 19 calendar days on a road-paving project partly because of weather delays.

Already this year, Southeast Texas has received at least a trace of rain on five of seven days. A contractor said his jobsite got 10 inches of rain last week.

High water was across roads in the usual low spots, in the northeast and northwest ends of the county, along the Sabine and Neches Rivers, and along Adams Bayou in north Orange.

Joel Ardoin, emergency management coordinator for Orange County, said recent work by the county, and the county’s two Drainage Districts had made things better than during Harvey’s flooding. 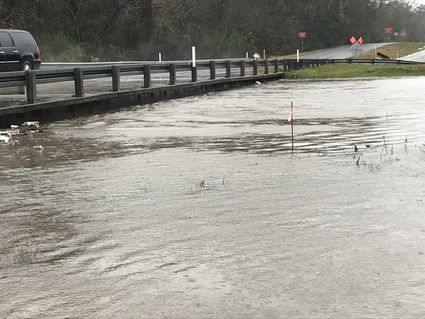 “That work that they have done is surely an improvement,” Ardoin said.

“But those in low-lying areas on the northeast and northwest of the county, when those rivers make their releases, there’s nothing much you can do.

“We had no reports of water in houses last weekend, but a lot of people who live on the water are surrounded. Both are connected to releases [at Dam B and Toledo Bend].

“The Sabine River Authority has lowered its gates and the river has crested. But the water will remain at that level probably for a week or two.”