He stopped for Thursday lunch at the Old Orange Cafe in between visits to Jasper and Deweyville to encourage owners of Harvey-damaged homes to apply for the Homeowners Assistance Program (HAP).

“The questions that I asked him were how the government shutdown was going to affect us,” Crooks said. “He said most of the paperwork that is required for recovery was already done, that it [the shutdown] wasn’t affecting it.”

They talked about citizens’ unmet recovery needs and how folks in Orange County can qualify for some of the $652 million of federal grants set aside for remaining unmet needs caused by the August 2016 storm that wreaked $113 billion of damage along the state’s coastline.

The GLO has $61 million available in Southeast Texas for the Affordable Rental Program, for rehabilitation, reconstruction and new construction of affordable multi-family housing projects impacted by Harvey.

Also, $100 million is available for an upcoming reimbursement program. This program hasn’t been officially “rolled out” yet, but it will allow Harvey-affected homeowners to submit receipts or invoices for home repairs.

One big problem, in Crooks’ mind, is that the federal Housing and Urban Department, which funnels block grant monies through GLO, isn’t planning to let people seek reimbursement for any Small Business Administration loans they may have used to repair their homes from Harvey damage.

“The way HUD is interpreting it, it won’t include people that got an SBA loan. I have a big problem with that,” Crooks said.

“Congressman Babin has a problem with that. It is the best thing that people can do to get back on their feet fast.

“HUD is interpreting it as a duplication of benefits, getting both HUD grants and an SBA loan, but that’s not a problem. Use the reimbursement to pay back the loans.

“I spoke at length with Commissioner Bush about that and he’s in agreement. Hopefully, that can be worked out before they roll out the program.”

Ardoin spoke with Bush and staffers about FEMA trailers and rent that is going to be collected after March 31.

“There is a waiver process,” Crooks said Ardoin passed on. “They’re going to work on getting the waiver out to the public.”

About 300 FEMA trailers are still in use in Orange County as homeowners repair their homes.

Bush’s East Texas trip was partly because fewer than 100 HAP applications were turned in by homeowners in Jasper and Newton counties. 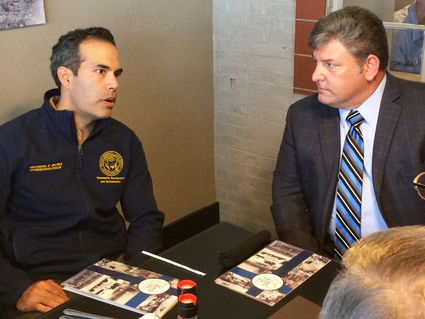 In Orange, people inquiring about HAP can register at the Orange County Convention and Expo Center, 11475 FM 1442, from 9 a.m. to 4 p.m. Tuesdays through Thursday.

Eligibility details are available by going to the website recovery.texas.gov and clicking on Info for Individuals or by calling 1-844-893-8937.

A document checklist for HAP – or most GLO programs – includes a valid photo ID, income information for all household members 18 and up, proof of home ownership, proof of primary occupancy, proof of child support payment, disaster assistance previously received, proof of property taxes, manufactured home documentation, proof of current flood insurance (if in Flood Zone), proof of disability (if applicable) and a completed application.