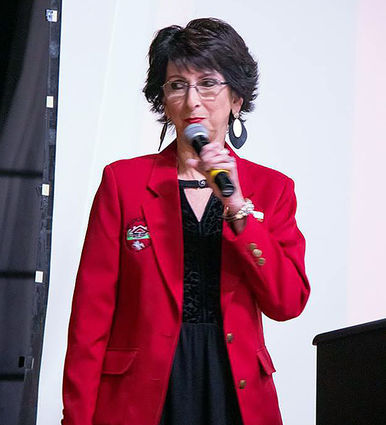 The large variety of food offered something for everyone. Attendees picked up and plate at one end and went from table to table collecting the tasty treats.

Also in the gymnasium of the elementary school where various items for a silent auction. Don Bonnin provided the Sports Memorabilia. Items up for bid included items such as an autographed Cowboys football jersey, Dallas Cowboy replica Superbowl ring, a Bob Lilly signed football, and an autographed guitar signed by the band Florida Georgia Line.

Master of ceremonies was Kirk Ellender. Chris Slaughter belted out the National Anthem a capella which amazed the crowd.

The first award of the evening went to the Bridge City Chamber Citizen of the Year, Eric Andrus. It was followed by Olson Engineering which won Business of the Year. Both also received certificates of appreciation from Lanie Brown, Regional Director of Community Relations on behalf of Congressman Brian Babin.

The next awards went to Scot C. Shafer, owner of Farmers Insurance Agency and Dave Derosier, owner of OhainWEB.com. They both received the honor of becoming Lifetime Ambassadors. This award goes to those who have served for eight continuous years as Ambassadors for the Bridge City Chamber.

Other awards included the Ambassador of the Year award which went to Rani Dillow. She is a loan originator at Westin Mortgage Group. Dillow is also on the Chamber's Board of Directors and is 2019 Ambassador Vice-Chair.

Then it was time to pass the gavel. With Batman in hand, Eric Andrus accepted the gavel from 2018 Ambassador Chairperson Candace Mulhollan, who is a realtor for RE/MAX ONE.

Finally, Bridge City Chamber of Commerce President for 2018 Terri Gauthier passed her gavel to 2019 President Beth Arnold. Arnold is a CU Marketing Executive for Wellspring Credit Union. She expressed her gratitude upon accepting the gavel and thanked Terri for her service to the chamber in 2018.

"You left me big shoes to fill," Arnold said to Gauthier.

Upcoming events for the Bridge City Chamber of Commerce include a Murder Mystery Dinner on March 9th. This year there will be a western theme compared to last year which was pirate themed. Guests attending the event will dress in costume too.

Guests will vote on the "whodunit" following the play to help solve the mystery of the murder.

Eric Andrus is directing the play and said it will certainly be lots of "fun." He invites everyone to come and join the festivities.

Tickets are $300 for a table of eight people or $40 for each person. Tickets are not on sale yet but will be soon.

The next Chamber event is the Networking Coffee which is scheduled for 8 a.m February 12th. It is hosted by Neches Federal Credit Union located at 410 Texas Avenue.