Photo: Architect Don LaBiche looks up at a monitor displaying a PowerPoint presentation on work required to fix the front of the Orange County Courthouse on Friday, Jan. 18, in Orange. RECORD Photo: Dave Rogers

Cutline 2: A PowerPoint presentation presented to Orange County Commissioners in a Friday, Jan. 18, workshop meeting on restoring the courthouse entrance included a closeup of the eagle atop the marble-covered front.

Cutline 3: Don LaBiche of Beaumont’s The LaBiche Architecture Group offered Orange County Commissioners a PowerPoint presentation to document the scope of work needed to repair and restore the courthouse entrance, which has been shuttered since 2015.

Making the Orange County Courthouse safe again in time for this year’s Fourth of July celebration is a great idea that might happen.

August is a more likely date for completion of a $200,000 fix for the three-story front entrance for the historic 1937 courthouse, county commissioners and Beaumont architect Don LaBiche agreed at the end of a Friday, Jan. 18, workshop meeting on the project.

They reminded everyone the timetable is based on “favorable” weather for the contractors.

And then everyone in the commissioners’ courtroom had a good laugh, recalling the last two years of historic, construction-delaying rainy weather.

The project to repair cracks in the marble and granite near the courthouse front doors has been talked about since 2015.

That was when it was noted that pieces of the marble front were pulling away from the limestone building.

Since then, the entrance has been closed, covered by scaffolding and yellow “caution” tape. The worry is that some of the marble might come crashing down.

Fixing the art-deco entranceway will be primarily paid for with rebate checks from Way Services, County Judge Dean Crooks said.

LaBiche, who has 16 years’ experience working with historical restoration, brought along a PowerPoint presentation to Friday’s meeting.

It included the results of his firm’s survey of the building which has been assisted by the recent discovery of the 1937 courthouse blueprints.

A PowerPoint presentation presented to Orange County Commissioners in a Friday, Jan. 18, workshop meeting on restoring the courthouse entrance included a closeup of the eagle atop the marble-covered front.

-- close-up photos of marble pulling away from the limestone at the sides of the “Orange County Court House” sign just below the eagle at the top;

-- small cracks in the stone soffits and condensation under them;

-- window frame deterioration around the floor-to-ceiling windows on the second and third floors of the entrance.

“We’ll know exactly what the problem is as soon as we get the [loose and cracked] marble down,” La Biche said.

“We’re going to take all the soffit panels down, remove the rosettes and clean them up, and fix the condensation and leak problems.

“When we get through with windows, the glass will be put back in with sealant, not old-time glazing.

“It’ll be much easier to maintain. Once we do this process, Kurt [county maintenance director Kurt Guidry] is never going to have to worry about rust again,” LaBiche vowed.

The architect said his plans needed the OK of the Texas Historical Commission, which could take as much as six weeks. But meanwhile, LaBiche expects an expedited six- to eight-week schedule for advertising for contractors, scoring the proposals and choosing the best company for the work.

He wants to be able to start work soon after state approval and says construction should take 90 to 120 days – pending weather delays.

Crooks said the $200,000 budget for the project includes $50,000 for contingencies, unexpected problems.

“You never know what you’re going to run into with an old building,” he said.

Commissioner Johnny Trahan, a “glass half-full” optimist, said “We have five and one-half months until the Fourth of July. Hopefully, we could finish it by then and dedicate it July Fourth.”

Newly elected Precinct 2 Commissioner Theresa Beauchamp made a campaign priority of fixing the courthouse, home to five state district and at-law courtrooms plus another for Precinct 1 Justice of the Peace.

The project discussed Friday doesn’t go as far as some alternatives discussed during the past three years. While this one covers restoring the entrance to a safe state, one much-discussed earlier plan called for complete historic restoration of the courthouse.

That would have included replacing all the courthouse windows with ones like the originals, installed before the building was air-conditioned, that cranked open and shut.

“I think the whole county is ready for this -- past ready for this,” Beauchamp said Friday. “I feel confident after this meeting today we’re going to get our courthouse brought back to its original glory. 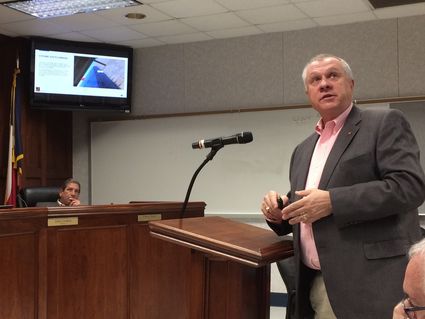 “It would be the perfect world if we could have a dedication like Johnny said on July Fourth, because we’ve got the fireworks down at the river. It could all coincide.

“But it may not happen.”

“I’d be very surprised if we don’t get finished before then,” he told Beauchamp. “I don’t think the contractors can afford to go much longer than that.”