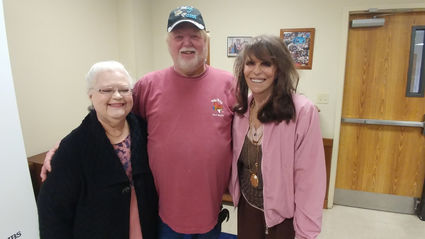 Debra McCombs, left, and Diane Grooters, right, stayed after the meeting to ask questions regarding Posey's vegetable stand/cookery, called Oza's Diner in honor of Posey's late mother, located under a canopy on MacArthur near Adam's Bayou.

Posey is one of nine children birthed by Ms.

Posey grows his produce on acreage in Louisiana, Texas, and Oklahoma, distributing to retail grocers in many areas.

Posey discussed his journey to becoming a farmer, which included years of being a contractor previously in Orange County.

After the contracting took a lull, he turned his attention to the growing of crops, particularly vegetables, and renewed his fascination with the likes of crock-neck squash, zucchini, tomatoes, cabbage, sweet potatoes, onions, turnips, beets, broccoli, and corn, among many.

Due to some difficulty with the soil in Orange County and other places, Posey has invested about $50,000 in just acquiring special tanks in which he grows many of his vegetables, along with special water and fish.

The process, known as hydroponics, is a method of growing plants without using soil.

This technique uses a mineral nutrient solution in a water solvent, allowing the nutrient uptake process to be more efficient than when using soil.

Plants grown in a hydroponics system do not need to develop extensive root structures to search for nutrients.

Vegetables and fruits with a higher density and nutrient requirements such as cucumbers, tomatoes, and peppers require a far higher fish density.

According to Posey, fish excrement is an excellent fertilizer for the plants.

This horticultural method has a long history due to its efficiency in growing plants, extremely popular in China.

Aquaponics is a newer agricultural system, so it is not as popular when compared to conventional aquaculture and hydroponics.

The first large-scale aquaponics system was developed at the University of the Virgin Islands.