LOTS OF WATER IN RAYBURN 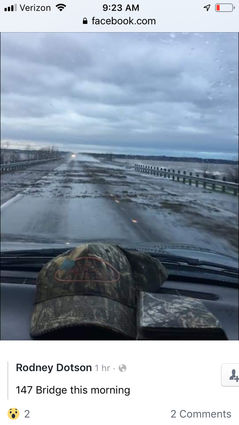 I vaguely recall Sam Rayburn reaching its highest level back in the early 90’s, but passed on the opportunity to see what the lake looked like when holding that much water.

Last week, however, I ran the lake northward on Hwy.

96, crossed the 147 bridge and returned on the east side of the lake.

It was shocking and they have gotten even more rain since then.

A number of the parks and ramps were already closed due to the high water conditions and no one could argue that decision.

As of this writing, we are not quite there yet, but one more major rain event in the next week or so could send water over the spillway.

I haven’t heard any reasons for not already drawing the level down, but had the Corps of Engineers done so at the same time the SRA was forced to lower Toledo Bend, Sabine Lake trout fishermen would be right back where we were following Harvey.Possibly even worse as we have yet to recover from that catastrophe.

In spite of the incredible glut of water, I was shocked at the weights posted in last week’s FLW event on the sprawling reservoir.

It is, in fact, even more sprawling right now and a number of the pros mentioned the rising water each day.

While NFL fans were treated to two overtime thrillers last weekend, Rapala pro, Terry Bolton, was forced to battle to the wire to earn his first FLW win in 25 years.He gave his wife credit for encouraging him to extend his pro career one more year, but it was a fortunate move in practice and good “on the water” decisions that won it for him! Across the four day event, bass were caught on every lure and pattern imaginable, but Bolton found his winning bass holding in drains and bare depressions in the grass while relying on several crankbaits that tracked different depths to amass his winning catch.

Easily the decision that earned him his first victory, was electing to continue fishing a drain the second day with a big bag of fish already on board, rather than leave it for the next two days.A nine pound bass would eventually hammer his crankbait pushing a solid 27-pound bag to a jaw dropping 33-pounds.When the last fish was weighed in on the final day he would nudge Nick LeBrun of Bossier City by a mere 12 ounces with his four day total of 91-pounds 3 ounces.

I was equally surprised that many of the regional pros struggled so badly.Much of that has to do with not only the high water, but years of experience that make it tough to think outside the box.Make no mistake about it, there is a solid contingent of super pros that reside a short truck ride from the shores of Rayburn.

I won’t mention names because I was asked not to do so, but I was mildly surprised by a pair of game plans that resulted in checks.

The first involved a technique and the second involved a change in game plans that seems rather obvious once someone else figures it out.

The first involved fishing the Whacky worm exclusively from six to 22 feet all four days.“I fish a lot of craw worm and lizard when Carolina rigging,” said the pro, “but I caught a few fish drifting with a Carolina rigged finesse worm in practice and never took it off again.

He attributed it to the smaller size and stated that he didn’t miss a strike or pull a fish off from start to finish.“I caught a lot of small bass in the process,” he added, “but at least I caught them!” The second revelation just seems too simple.“I fished areas that I haven’t fished in twenty years due to boat traffic,” stated this pro.“When I found a few bass in practice holding in 6 to 10 feet of water, rather than waste time hunting open lake structure at that depth, I simply marked down every launch that was closed and fished those coves.” There was little or no boat traffic and he culled a limit everyday on crankbaits.

No sense in over thinking the obvious.