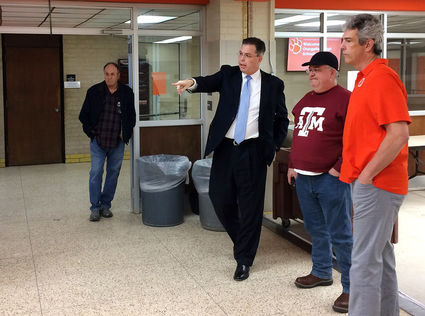 Photo: Stephen Patterson, superintendent, shows members of the Orangefield ISD Board of Directors, renovations made at the high school cafeteria after damage from Tropical Storm Harvey.

A year and a half after Tropical Storm Harvey flooded two of three Orangefield ISD campuses, it’s almost back to normal for the Bobcats.

Plus some fancy new trim.

The school district has sunk $7.3 million into the rebuild, making some long-needed updates like moisture-proofing the walls and floors and building new security vestibules at the front of all three – elementary, junior high and high school – campuses.

Superintendent Stephen Patterson said he expected the district to pay for it all with $5.3 million in FEMA reimbursements and $2.5 million in insurance payments.

The older elementary students (grades 3-5) will continue to go to classes in portable buildings for a few more days and the high school fix won’t be complete until staff can move some more furniture around.

Some punch-card items like new doors for some classrooms are expected to not be ready until March.

“It’s really hard to imagine how after the flooding we’ll come back stronger,” said Dr. Ronald Risinger, school board chairman, during a recent tour.

“We have a modern building without passing a bond.”

Many of the buildings on the Orangefield high school and elementary campuses dated back to 1957.

Besides new tile and lockers on the hallway walls, one of the top new additions is the Taraflex vinyl flooring.

“With what we’ve done, classroom wall and floors can sit under water and not be damaged,” said Richard Crump, project manager.

“This floor will save us about $50,000 a year on maintenance,” the school district chief said. “I wish we had it district-wide but we don’t have it in the junior high.”

The junior high sits on a hill overlooking the two other campuses. It did not suffer flooding in the 2017 storms; in fact the junior high doubled up and played host to the elementary students until portable buildings were put in place.

The only real work slated for the junior high is the new security vestibule, part of a security upgrade advocated for by Texas Gov. Greg Abbott after last May’s Santa Fe, Texas, school shootings that resulted in 10 deaths.

The governor sent $1.8 million to Santa Fe, but Patterson said recently none of that money had reached Orangefield.

Patterson said the district was prepared to spend $400,000 on the security improvements that would funnel all students through one entry per campus, with bulletproof glass between students and campus visitors.

Patterson hopes to complete the entryways during the spring semester.