That’s because U.S. Rep. Brian Babin read his laudatory proclamation on the floor of the House of Representatives before the Wednesday Jan. 23 gathering at the Shahan Center to kick off a year’s worth of events commemorating the golden anniversary.

Babin’s 500-word speech ended with this note for the Speaker of the House, Rep. Nancy Pelosi.

“Madam Speaker, it is my distinct honor to recognize Lamar State College Orange on this important anniversary. May God continue to bless and grow LSCO and the community and students it serves,” he said.

One who said he barely recognized the LSCO campus was Dr. Joe Ben Welch, who was there at the beginning. He served as top dog at the college for its first 19 years under the titles director, dean, provost and finally president.

“It’s wonderful,” he said when asked what he thought of the current campus, which takes up three square blocks of downtown Orange.

“We started out in the former Naval base at Tilley Tech. Then the Western Auto store. Now look at this!”

Welch and Dr. Michael Shahan, the campus president for 24 years, and current president Dr. Thomas Johnson were on hand for the hour-long ceremony at the 18-month-old building renamed for Shahan and wife Bridget upon his retirement in 2019.

Shahan had the unenviable job of leading LSCO through the devastation and recovery from Hurricanes Rita, Ike and Harvey, not to mention some other random flooding.

And he oversaw the campuses growth to 2,600-plus students.

“I think [my job] was trying to maintain a positive frame of mind and try to instill that kind of spirit in the people that work here,” Shahan said. “And I think we did a good job with that.”

Spears and Crooks presented proclamations, as did Texas Rep. Dade Phelan and Babin.

LSCO faculty member Kevin Doss read Phelan’s and after a Babin video he made just for the occasion, Brown read the congressman’s proclamation.

Students from Vidor High led the invocation, while Little Cypress-Mauriceville students led the pledge of allegiance, Bridge City students sang the national anthem and Orangefield High’s SophistiCats did a high-kick routine before Doss led the 300 or so guests in the Lamar State College Orange alma mater.

Johnson, the first-year president, kidded that he checked every morning when he came to work to see if his portrait was still hanging along those of Welch and Shahan.

“And then yesterday, it wasn’t. But then I noticed all three were down, and I realized why [they were hanging at the celebration] and I breathed a sigh of relief.” 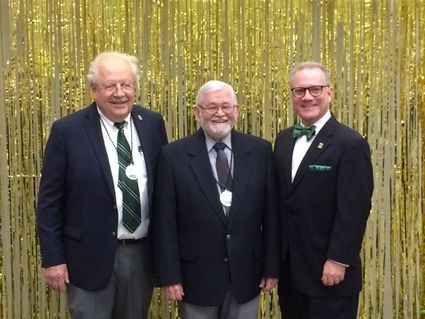 Dr. Thomas Johnson, president of Lamar State College Orange toasts to another 50 years at the end of the Jan. 23 50th anniversary celebration kickoff for the college. Former presidents Dr. Joe Ben Welch and Dr. Michael Shahan are at left.

To wrap up, champagne was served to all in attendance and Johnson led the toast.

“Let us raise our glasses to 50 years of educational excellence … to making a difference in the lives of thousands of our students … to a wonderful community, and to the future because the Golden Era has just begun,” he said.

“Here, here and cheers to another 50 years of Lamar State College Orange.”