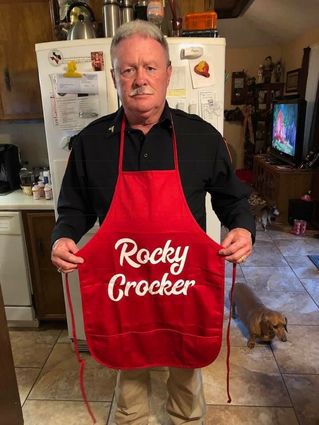 Photo: Rocky Bridges was given this apron by his daughter-in-law. He often wears it when cooking. Bridges who is well known for his delicious food will be teaching a cooking class at the local Agrilife Extension Office.

Rocky Bridges, husband, father, Orange County Sheriff's Office deputy and favorite cook to many people will take on a different role when he teaches a cooking class at the local Agrilife Extension office. For Bridges who is always giving of himself, this is a perfect fit.

Last year, Bridges taught a bread making class. Each member of the class made their own loaf of bread. There were 25 people participating in the class and it quickly filled up the maximum number of seats available.

This year, Bridges is looking at making a three course meal. There will be door prizes and mystery box ingredients. It will surely be fun for everyone while learning to cook healthy recipes.

Bridges grew up on a farm in Campbell, Texas. He learned to cook from his grandmother.

"I am going to teach you to be independent," Bridges said his grandmother told the growing boy.

Years later, Bridges has remained true to his grandmother's teachings and does about 95 percent of the cooking in his home. He also does the grocery shopping, housekeeping and laundry. But, he draws the line at ironing.

But, he loves it and wouldn't have it any other way. He proudly says his wife, Trina, is "spoiled."

Bridges cooks every weekend for his family. This is about eight people and he is known to give food to neighbors and friends too. He takes requests from family members on what to cook and sometimes has cooked things he doesn't particularly care to eat.

A person can't live in this area and not like gumbo and Bridges has a secret ingredient which leaves people wanting more of the tasty bowl of Cajun goodness.

Bridges is also known for his carrot cake. He cannot simply make one. It is not uncommon for people to request the rich cake so he makes several at a time to leave at random places. The delicious carrot sheet cake is covered in a rich icing of powdered sugar, cream cheese and of course pecans.

On Feb. 1, Bridges will have dedicated 44 years to law enforcement. He has been at the OCSO for seven years, but before then he was at the Port Arthur Police Department.

His love of sharing food has been occurring for a long time. In 2011, while still at PAPD, he fed over 500 families at Thanksgiving and again for Christmas.

However, it wasn't always food which drew him to help others. He was "dared" to help a family rebuild their home after a hurricane destroyed it. He accepted the challenged for the grandmother raising her own children and her grandchildren by getting the building materials and appliances for them.

"When they returned home, everything was there for them," Bridges said.

For Bridges who learned from his grandparents to "work together" this was a shining moment.

Bridges who is strong in his Christian faith, is also a Mason and Shriner. Everything he does is by the values instilled in him by these. But, he also does things out of the "kindness of his heart."

He is also known by area children for passing out peppermint candies with parents permission. He is often flagged down and asked for a piece of candy. He happily obliges.

Monday through Friday, Bridges answers calls for service in the county when working for the OCSO. He primarily answers animal calls, but responds to other calls too.

"I am very dedicated to the department and the citizens of Orange County," Bridges said.

Bridges who will be 62 years old in May is in no hurry to retire. His health is good and he plans to stay fit too.

"I look forward to getting up everyday," Bridges said.

But, he is also looking forward to meeting people in his upcoming class. Bridges who is said to never meet a stranger is ready to cook and have fun.

"Life is too short," Bridges said.