In 1977, the King of Rock and Roll died and nearly had Orange County’s soon-to-open park named after him.

“So we got the historical society to suggest a name.”

The park opened in 1979 as Claiborne West Park. Pete Runnels was county judge. Raymond Gould, namesake for the Vidor Community Center, was a commissioner.

So, who was Claiborne West?

Many people who regularly use Claiborne West Park don’t even realize it was named after a flesh and blood person. A recent county press release referred to it as Claiborne Park and a lot of people think the West in the name is directional. Many look for a second county park, Claiborne East, on the map. Clybourne Park is a play.

Claiborne West was a true Texas and Orange County pioneer.

The Texas Declaration of Independence was signed by 58 delegates at Washington-on-the-Brazos March 2, 1836. Claiborne West, namesake of Orange County’s 100 acre-plus park, was one of the signers and a member of the first Republic of Texas Congress a year later.

He was one of 58 men to sign the Texas Declaration of Independence from Mexico on March 2, 1836 and helped draft the Republic of Texas Constitution.

A year earlier, he was responsible for the designation of Cow Bayou as Jefferson Municipality, the forerunner of Jefferson County, the eastern part of which became Orange County.

A thorough search located no portraits of West and information about him seems in short supply given his proximity to Texas’ best known trailblazers.

Born in Franklin County, Tennessee, in 1800, West moved as a young man to Louisiana, then came to Texas in 1825, settling in the Cow Bayou Settlement.

He received a league (4,428 acres) of land by grant of the Mexican government.

He attended the first political gathering of colonists in Mexican Texas, the 1832 Convention in San Felipe, center of Stephen F. Austin’s colony.

Three years later, West was a delegate to the 1835 Consultation, which became Mexican Texas’ provisional government from October 1835 through March 1836.

West attended these meetings as a representative of the Liberty Municipality, which at the time consisted of what is now 10 East Texas counties.

But West left the 1835 Consultation after having established the Jefferson Municipality.

Cow Bayou was renamed Jefferson, and West served as postmaster.

At the Convention of 1836, he signed the Declaration of Independence. Then he returned home to Southeast Texas and furnished provisions to soldiers prior to the Battle of San Jacinto.

He was elected by Jefferson County voters to the first Congress of the Republic of Texas.

West moved to Montgomery County in 1840 and saw Texas join the United States in 1845.

By the time Orange County was formed from the east end of Jefferson County in 1852, West had moved to Guadalupe County, where he died, at age 66, in Seguin.

He is buried at Seguin’s Riverside Cemetery.

The park named after him is a wooden recreation area comprising 453 acres of land located 12 miles west of Orange.

It is a wildlife and bird sanctuary and part of the Great Coastal Birding Trail.

Recreational facilities include a softball field, volleyball court, disc golf course, horseshoe and washer court. There are two playgrounds, one for toddlers, the other for youngsters. 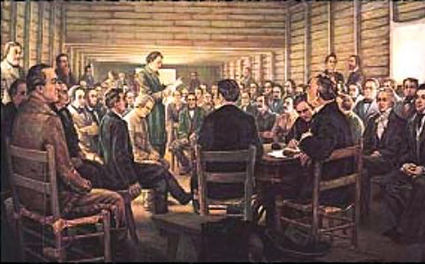 The Texas Declaration of Independence was signed by 58 delegates at Washington-on-the-Brazos March 2, 1836. Claiborne West, namesake of Orange County’s 100 acre-plus park, was one of the signers and a member of the first Republic of Texas Congress a year later.

A pond is stocked with Rainbow Trout two times a year and one of those was Tuesday. There is overnight camping and an amphitheater popular for weddings and other family events.

Visitors can walk five miles of trails in the nature preserve.

Currently, the park is undergoing restoration efforts from Tropical Storm Harvey. Three large shelters have been closed because of structural weakness.

But hurricane mitigation work has been planned and is awaiting go-aheads from the federal government.