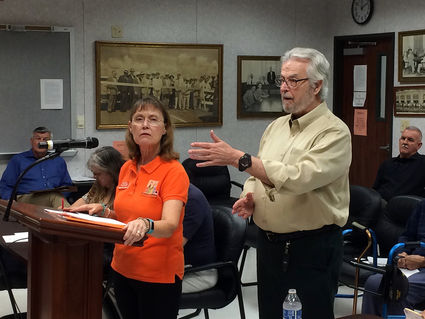 Orange County commissioners put their money where their mouth is Tuesday, contributing $500 to help with a Community Trash Off and Tire Disposal Drive being held March 2 by Keep Orange County Beautiful.

The Community Trash Off – set to begin at 8 a.m. this year at the Orange Boat Ramp -- has been an annual event in Orange since 1995, started by a small group of concerned citizens who began by cleaning trash out of Adams Bayou.

The Stark Foundation got involved in 2002 when the planning for Shangri La Gardens began.

Today, the Trash Off includes efforts to clean not only Adams Bayou, but the Sabine River and the streets of Orange, Pinehurst and West Orange.

Volunteers have collected more than 100 tons of trash since the annual event began.

KOCB is working with Southeast Texas Resource Conservation and Development, a community outreach arm of the Texas Commission on Environmental Quality (TCEQ) and Superior Tire on the tire disposal drive.

The drive will begin

Commissioners voted 5-0 to both endorse the event and spend the $500 to help defer administrative costs.

The group has also partnered with the City of Orange for Second Saturday Trash Pickups and started a recycling program at West Orange-Cove schools.

The group also struck a chord when anti-littering efforts came up.

“Litter in the county is out of control,” Commissioner Theresa Beauchamp said.

“What we’d like to see,” KOCB member Sandra Cash said, “is a coordinated effort between the cities and the county to update and enforce anti-littering ordinances.”

In other action Tuesday, commissioners’ court agreed to a amend a prior pipeline right-of-way agreement and easement at the county airport.

Originally granted to the Socony Mobil Oil Company in 1959, ExxonMobil agreed to pay $13,804 for back payments due and a one-time $153,375 payment for a perpetual easement.

The commissioners agreed to OK a payment of $30,400 for spray units and GPS support systems to keep its mosquito spraying equipment state-certified and authorized renewal of an $8,800 per year environmental consulting services contract.

Of that total, $73,000 was for retiree group insurance for February and $213,800 went to Wendorf, Beward & Partners for work to secure Tropical Storm Harvey recovery funds.

A recent Record story reported accurately that the county had agreed to four “task orders,” each for about $1.5 million with Wendorf, Beward.

Both County Judge Dean Crooks and company principal Nancy Beward explained last week the high figures were high-dollar estimates and that in fact the county had only paid about $2.2 million to the consultants.