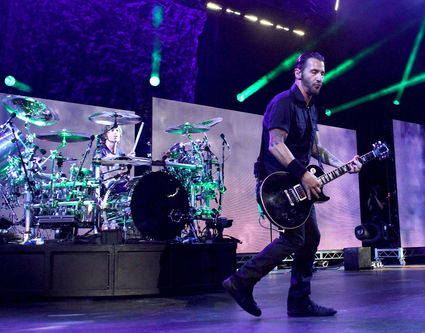 Boston-based rock act Godsmack will perform at Ford Park Pavilion in Beaumont on Wednesday, April 10. Tickets go on sale at 10 a.m., Friday, Feb. 15, at the Ford Park box office and online at http://www.livenation.com.

One of the most popular hard rock acts of the past 20 years is returning to Southeast Texas this spring.

The Boston-based rock outfit Godsmack will kickoff its spring U.S. tour in early April and Beaumont is on the schedule, as the band announced it will perform at Ford Park Pavilion on Wednesday, April 10. Tickets are $22.50 - $62.50 and go on sale at 10 a.m., Friday, Feb. 15 at all Ticketmaster outlets, including the Ford Park box office and online at www.livenation.com.

Godsmack, which last performed in Beaumont in April of 2012, is touring in support of its seventh studio album, “When Legends Rise.” The record, which was released in April 2018 and peaked at number 8 on the US Billboard Top 200 chart, features the hit singles “Bullet Proof” and the title track.

The group is well known for its numerous hit songs, including “Voodoo,” “Awake,” “Whiskey Hangover,” “1000hp,” “I Stand Alone” and more.

The band, which features the charismatic vocalist and guitarist, Sully Erna, as well as bandmembers Tony Rombola, guitar; Robbie Merrill, bass; and Shannon Larkin, drums, is coming off a highly successful summer and fall 2018 tour with Shinedown and Like a Storm. Godsmack is currently in the midst of a European tour with Like a Storm, which ends April 1.