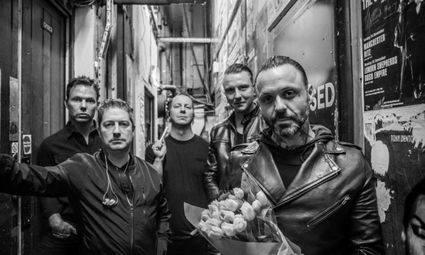 Houston rock outfit Blue October will return to Southeast Texas on Thursday, May 9, for a performance inside the Jefferson Theatre in downtown Beaumont. Tickets start at $30 and go on sale at 10 a.m., Friday, Feb. 15, at all Ticketmaster outlets.

The Houston-based rock act Blue October is returning to the Golden Triangle this spring.

Alternative rock band Blue October will perform at the Jefferson Theatre in downtown Beaumont on Thursday, May 9. Tickets start at $30 and go on sale at 10 a.m., Friday, Feb. 15, at all Ticketmaster outlets, online at http://www.ticketmaster.com and at the Beaumont Civic Center box office.

Founded in 1996, Blue October has made numerous appearances in Southeast Texas throughout the years and has continued to return even as the band’s popularity has increased throughout the music world.

Blue October, which is best known for the songs “Hate Me” and “Into the Ocean,” is supporting its ninth studio album, “I Hope You’re Happy,” which was released on Aug. 17, 2018. The album peaked at number 28 on the Billboard Top 200 albums chart and number three on the U.S. Alternative albums chart and features the title track and “Daylight” as singles.

Visit http://www.blueoctober.com for more information on the band and its upcoming tour.