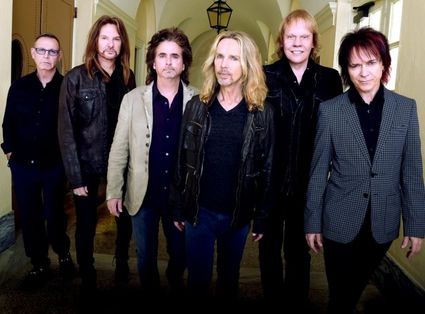 The rock band Styx will perform at the Golden Nugget Casino in Lake Charles, La., this Saturday, Feb. 16 for ages 21 and older. Tickets are available at the venue box office and online at http://www.goldennuggetlc.com.

For the better part of five decades the rock band Styx has entertained countless millions of fans with live performances and big hits. The band returns to the region this weekend to do the same.

Styx returns to the Golden Nugget Casino in Lake Charles, La., at 8 p.m., Saturday, Feb. 16 for a concert for ages 21 and older. Tickets are available online at http://www.goldennuggetlc.com and the venue box office.

Formed in 1972, Styx dominated the airwaves of rock radio courtesy of the bands more than 30 hit singles, which include “Renegade,” “Blue Collar Man,” “Too Much Time on My Hands,” “Come Sail Away” and many more and can still be heard today. However, the band likes to perform newer material as well.

Styx is touring in support of its 16th studio album, “The Mission,” which was released in June of 2017 and peaked at number 45 on the Billboard Top 200 albums chart. It features the singles “Gone Gone Gone” and “Radio Silence” and is a concept album about a mission to Mars in the year 2033.

This is the band’s first studio album in over a decade and was a surprise to many fans who had been waiting patiently for something new from the quintet.

Tommy Mann: How did the band manage to keep it so quiet about finally working on new material after so many years? It seems like every interview the media and fans are asking.

Lawrence Gowan: It wasn’t easy (laughing)! The truth behind it is that we always had new music, but our focus was on the band and performing. Would we rather spend six months in the studio or on the road playing for the fans? And we always chose the fans. We all made a pact to not talk about it until it was time. We made the record because we wanted to do it, and we knew if we didn’t love it, then we didn’t have to put it out.

TM: Was it challenging in regard to constructing material for a concept album as compared to songwriting in general?

LG: There are a lot of challenges to making a Styx record (laughing). Since we knew this album was going a certain direction, it keeps you focused on the writing and where the parameters of the story are. It definitely helped to keep it on the rails of where we wanted it to go. My favorite songs on the record change all of the time, but it really is still enjoyable for me to listen to it. It’s actually increased my appreciation for the album since we played the album in its entirety last month at The Palms Casino in Las Vegas.

TM: I know the band added a gem to its set list during your tour last summer. What led Styx to incorporating “Mr. Roboto” into the set again? And will it be on the set list for Lake Charles?

LG: There is such a wild history in this band. A lot of resistance (from James Young and Tommy Shaw) to including the song was due to the difficulty from the touring of that album (Kilroy was Here). We started thinking about it five years ago, and there gradually became less and less resistance over time. This song is a big part of our history, so we all decided to work on it for a couple of days in Nashville before our tour last summer with Joan Jett. We decided to rock it up a little harder than what it was in the past and toughened it up a bit for the live show. It’s a little darker and more foreboding now but it works. I think the fans in Lake Charles will like it.

TM: This leg of the tour is very short and ends in Lake Charles. While the band may be taking a brief break, according to your Instagram, you will remain quite busy, correct?

LG: Oh, yes. Immediately after Lake Charles I will fly back to Montreal to start my Gowan shows for my solo band. That starts two days later. Some people know, but a lot do not. Before I joined Styx, I did my own project. I released six studio albums in Canada, four of which were platinum and two were gold. That included four number one songs and 10 Top Ten singles. That is how I met the guys in Styx, as I opened shows for them in Montreal in the 1990s.

TM: Styx has been part of big summer tours the past few years as the band toured with the likes of Def Leppard, Joan Jett, Tesla and others. What’s on tap this year?

LG: I’m not really sure if we will just stay out on the road on our own this year, or if we will go out on the road with another big act. We have some big shows overseas in early June in London and Norway and at the Sweden Rock Festival and then some shows back in the states. Either way we will be out on the road and having fun.