Time For The Trap 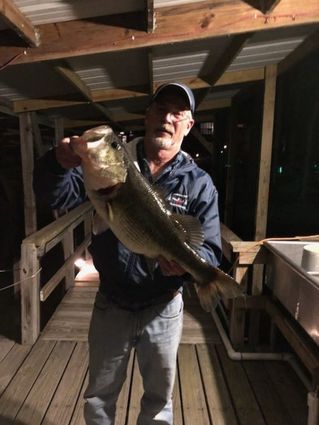 Bend was a mini-shot of warmer weather.That, combined with our slightly

longer days, was enough to spur the largemouth interest in shallower water!

Only last week, Brad DesLatte sent me a picture of a bass in the 7 to

8-pound class that his brother-in-law, Charles Swann caught while

fishing off his dock at night.It wasn’t a planned trip, but after

his lights.That was not the first big bass that Swann and his wife have taken that

close to their camp, but it is another positive sign for antsy bass

fishermen.He said the water was still off-colored in the McGee’s area,

but obviously not enough to bother the fish.Deron Teal sent me a text Sunday night asking if it would be ok to send

me a couple of pictures of fish.I no sooner replied in the positive than

the images popped up on the phone.I was shocked!

Initially, because you seldom see most fishermen ever keep big bass, but

more so due to the size of the bass lying on top of the cooler.He said

telling which one was the largest of the seven fish.Their bulging

stomachs indicated that they were probably already carrying eggs.

stringer weighing 24-pounds 11 ounces.We were cranking Traps over six to

eight feet of grass in the Housen Bay area, but because there were so

many boats I told the boys to just stay around the camp the next day.

until Sunday,” said Deron.“They got up bright and early around noon and

didn’t catch their first bass until four o-clock.”The two youngsters were fishing an orange crawdad three quarter ounce Trap over shallow grass somewhere between Toro bay and Red’s Point.“They couldn’t tell me exactly where they were,” said Deron, “but I will know

by the time they leave!Before signing off, Deron added, “We live up here so we can pick our

days, but we have not had a year in the past six years that we haven’t

caught at least one nine pound bass in Housen Bay in

February.John-Paul’s eleven pounder was the largest. He is predicting a very good run on big bass this year due to all of the new hydrilla.“It doesn’t help the bass that much, but it sure helps the fishermen.Any break in the grass can hold a big bass waiting to spawn.”

flipping, virtually all of them carry at least one rod designed to do

just that.Some of them just don’t like to fish either technique, but

they still carry a pitching stick out of self-defense.

deadly the Trap is this time of the year, but refuse to purchase a rod

designed to make fishing it much easier. There are those days when you

and catch bass, but that technique seldom fools big bass.

allowed to fall again.Deron said that neither of the boys said that they

ever felt one of those big bass hit their lure.It felt as though they

were momentarily hung up in the grass and then the line started moving.

whether to use braid or fluorocarbon line.Virtually all of them are

fishing a 6 foot 10 inch or longer rods with a fast action.The rod has

cast long distances, but easier to jerk the trap free from the grass as

missed the fish, but it does man that she is already digging deeper into

the grass.Fishing a Trap can work you to death, but it keeps you in the

game for the bass of your dreams!