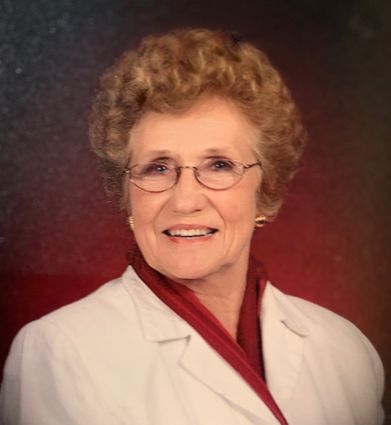 Funeral services for Louise Mayberry will be 1:30 p.m., Saturday, February 23, 2019, at First Church of the Nazarene in Orange. Officiating the service will be Pastor Bill Carr and Pastor Brad McKenzie.

Louise is survived by her son Stephen Maberry, and his wife Mary Nan; Daughter Joyce Maberry; And their combined 9 grandchildren, and 9 great-grandchildren.

In lieu of flowers the family request that you consider donating to the Orange Salvation Army at http://www.salvationarmytexas.org/orange/. Louise was a strong supporter of this local organization.

Born in San Angelo Texas, January 24, 1929, Louise was the oldest child of Arthur Benjamin and Renda Jones. Arthur was a depression driven job seeker which caused the family to move frequently as he sought opportunities in various places. As were the times’, the whole family pitched in, including the children. This included harvesting crops and other odd jobs. Over time Louise was joined in harvesting crops by three brothers and a sister. During this time the family would live in Corpus Christi, Tx., Missouri, Brownwood Tx., El Paso, Tx., Arizona, California, and Indian Gap, Tx.

At age 17 Louise and her family were living in California. She had completed high school and began studying at a Junior College. It was there that she met Louis Maberry, a recently returned sailor, at the church they both attended. The two became friends and began courting. When Louise’s family prepared to make another move, she decided to stay with Louis. The two married shortly after.

The newlyweds moved to Mount St. Helens, Oregon to be near the Maberry family. They stayed there until it was time for their first child to be born. They decided to move to Arizona to be near Louise’s mother so she could help with the baby. From there they went to Arkansas where Louis’s parents now lived. Here they stayed until an uncle told then about opportunities for work in a place called Orange, Texas.

Their small family arrived in Orange around 1949.

They initially lived in Riverside where Louise worked at a grocery store and as a car hop while Louis found work in construction.

Louis later worked a milk route, and then for Coca Cola.

As the years passed their family grew to include a son and two more daughters.

The family decided to move to Kinard Estates to accommodate their growing family.

Louise’s mom, who lived in Orange and had a small 25 bed nursing home, was looking to sell the establishment.

Louise and Louis bought the small frame building and business, and Louise took on the duties of learning how to operate the facility along with the rules and regulations that came with it.

This marked the beginning of a new saga for Louise and her family of six.

Never backing down from any challenge, Louise threw herself into the new work and learned everything from patient care, family needs, operations, and government regulations and payments.

Through her hard work and determination, by the early 1960s they were able to build a brand-new facility with 60 beds.

Another five years later they added another 40+ beds.

As the business grew, they would purchase two more nursing homes.

Beginning in the 60s, seeing the need for another kind of care service, Louise began a home health agency.

This business, Home Health Home Care, was formed to provide care to the elderly and the disabled in their own homes.

As the opportunities to expand the services and area arose, Louise added locations and divisions that focused on the specific needs various state agencies were targeting for assistance.

At the height of both the nursing home and home health operations, Louise was overseeing a combined operating budget of $50 million per year, serving over 20,000 people on a monthly basis, and employing thousands of full and part time staff, spanning from Orange to Abilene and Dallas to Del Rio.

Not bad for a girl who started out picking cotton.

Louise always had a fervent desire to be an advocate for the elderly and disabled that required assistance in order to meet their health care needs.

She worked with her peers in the “Texas Association Of Home Health Agencies”, and served as it’s President for two separate terms.

She was very active in the state and national nursing home associations.

In her 45 years in the field she spent countless hours seeing state and federal regulators and legislators helping to improve services to this population.

Louise also found areas to get involved and contribute locally as well.

Over the years she served in a number of organizations including: the Orange Chamber of Commerce; Orange Baptist Hospital; Orange Church of the Nazarene; Salvation Army; and the Texas Workforce Commission.

Louis and Louise enjoyed traveling across America and visiting the Far East. They also participated in various church mission trips, including one to Russia, and made many new friends along the way.

Louise was a beautiful lady who loved the Lord with such passion that even the Alzheimer’s could not stop her from giving the best prayers ever.

She and her husband donated much of their time, talent, and finances to support their local church with a thankful heart. She was a pioneer and strong example for women in the work force who went head to head with politicians and regulators and became a respected name in home health care and legislation.

She was a lover of animals, especially dogs, and spoiled them almost as much as her grandchildren.

She enjoyed tending to her small orchard where she taught her grandkids how to pick fruit and make preserves; her favorite being Mayhaw Jelly.

She loved her family, work, friends and people in general.

The world is a better place because Louise passed through, and many lives made just a bit easier.

We love you Mom, and we know you will have the coffee pot on when we get to join you!