In 1960, Parkhurst pitched the Cardinals to the regional championship, the highest level Class A baseball teams could play.

“Actually, the baseball field was right where the football field is now,” he said, looking at the longtime BC football stadium over his left shoulder.

“It was just a pasture they had mowed down. There were no lights, just a three-foot picket fence around the outfield and we never had a full infield of grass.

“It certainly wasn’t a real park. Just three or four rows of stands.”

Neither could you call Bridge City’s fledgling athletics program successful as Parkhurst entered his senior year.

“The high school was only three years old,” Parkhurst recalled, “and up until that time, we’d never won a district championship in anything.

“We had some good athletes in 1959-60, boys and girls. Our football team finished second in district and girls basketball and boys basketball won district.

“My younger sister, Pat [Pat Frederick now], started for the girls basketball team as a sophomore. She was all-district in 1960 and next year all-state. Brenda Woodall was also all-district from the Class of 60. They really had a good team.”

No one expected the 1960 baseball team to add to the trophy case.

With Parkhurst, a southpaw, starting every game they played – “I pitched every Tuesday and Friday,” he said. “There were two games early in the season I didn’t finish,” – the Cardinals went 15-3 in a district that included West Orange, Sour Lake, East Chambers, Hull-Daisetta, Hardin, West Hardin and Warren.

“I think baseball surprised everyone when we ended up winning the district,” Parkhurst said.

The Cardinals knocked off Livingston in bi-district, then beat Elgin 5-3 to win the regional title in a game played at Sam Houston State in Huntsville.

He says Wayne Brint and Doyle Tibbitts filled out the outfield, with Brint sometimes taking a turn to catch and utilityman James Stone filling in wherever needed.

Parkhurst was named to the all-region team.

Today, he is well-known in Orange County. He spent 35 years as a teacher, counselor and coach at West Orange and Little Cypress-Mauriceville high schools.

Then he was Precinct 1 Justice of the Peace for 12 years and city manager of Pinehurst for four and a half years.

“I retired three times,” said the 70-something.

A busy worklife was in keeping with Parkhurst’s upbringing.

As a young boy, he recalls many trips to watch ballgames at Orange Stark’s Tiger Stadium, a high school field that resembled a major league park with its covered grandstand behind home plate.

“Orange used to be a training camp for pro baseball teams,” Parkhurst recalled. “I remember seeing Babe Ruth’s autograph on the walls of the dugout. But who knows if he really wrote it?”

Parkhurst said once a year his father took him to see Major Leaguers play preseason games at Beaumont’s Stuart Stadium, home of the minor league Exporters.

The future educator and JP who threw a mean fastball and a baffling “float like a butterfly” knuckleball began as a right-hander.

“Instead of not being able to play, I learned to throw left-handed. In high school, I could throw with either hand, but I did better left-handed and never pitched right-handed.”

Joe Van Breeman, offensive coordinator for the football team, was head coach of the BC baseball team in 1960. James Campbell, the head basketball coach, was assistant baseball coach.

But Parkhurst says Terry Bushnell, a volunteer assistant coach who had been a scholarship baseball player at Texas A&M, was most helpful.

“Bushnell taught us the most. He’d actually played baseball and knew what he was talking about. He did the actual coaching,” Parkhurst said.

Coaches in the stands at the regional championship game coached Parkhurst next.

He was offered and accepted a scholarship to pitch for Sam Houston State.

After a year, he was sidelined by an arm injury and saw another side of sports that paid better.

“The school hired me as sports information director for all the teams,” Parkhurst said. “Financially, I did a lot better. I announced all the games and sent articles to newspapers, like the Houston Post and Beaumont Enterprise. 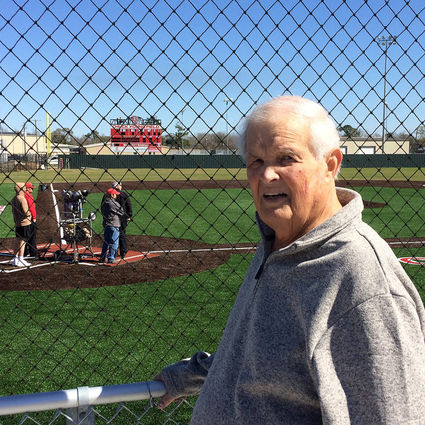 Parkhurst doubled his SID duties with a job as sports editor of the school newspaper, “The Houstonian.”

Among his teachers was famous Houston sports columnist Mickey Herskowitz and working for him at the paper was Randy Galloway, an equally well-known Dallas-Fort Worth sports columnist who now hosts a popular drivetime radio show in the Metroplex.

Not surprisingly, Parkhurst taught English and journalism in his first teaching job which lasted 13 years at West Orange. He also was a baseball assistant coach there.

He moved to LCM and spent 22 years as a high school counselor. He spent six of those years as assistant varsity baseball coach and head JV coach.