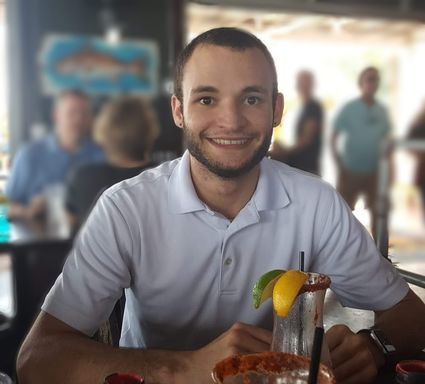 Burial will follow at Hillcrest Memorial Gardens in Orange.

Born in Nederland, Texas, on July 12, 1994, he was the son of Vickie Scales and Harry Flanagan.

Joshua proudly served in the Texas State Guard and spent extensive time in search and rescue during the aftermath of Hurricane Harvey.

He worked as an organist for Holy Trinity Episcopal Church in Port Neches and was also a part-time dispatcher for the Bridge City Fire Department.

Joshua was a brilliant musician and a very talented artist.

He loved writing and composing music.

He sang before he spoke his first word.

He was self-taught on the piano and various other instruments.

Throughout high school, Joshua played in the band and was a Cardinal Singer.

He received numerous awards and all-state honors for band and choir.

He was known as the family in-house wedding singer.

If it involved music, he was there.

Joshua was a Momma’s boy, creative, one-of-a-kind, very tender- hearted, kind soul, who loved to talk and could bring a smile to anyone’s face.

It was an honor to be his friend.

To know Joshua was to love him.

He was a shining star with the most majestic voice.

He adored his nieces and nephews and was known to them as the “fun uncle.” Joshua will be missed by all who knew and loved him.

He was preceded in death by his grandfather, Franklin Scales; his brother, Marcus Flanagan; and his uncle, Sam Leifeste.

Those left to cherish his memory are his mother, Vickie Scales of Orange; his grandmother, Sarah Scales of Orangefield; his twin brother, Jacob Scales and wife Hailey of Orange; his siblings, Dustin Guillory and wife Mallory of Bridge City, SSgt Katie Mae Cogbill and husband Daniel of Great Falls, Montana, Alayce Glende and husband Jeff of Orange, and Elizabeth Weston and husband Taylor of Bridge City; his aunt, Nina Leifeste; his uncle, Frank Scales and wife Jan; and his numerous nieces and nephews.

Honorary pallbearers are the Orange Community Players, all of his friends and family in the theatre community, all fellow musicians, and all of those who loved Joshua.

In lieu of flowers, donations can be made to the GoFundMe account, gofundme.com/funeral-expenses-for-joshua-scales, to help with funeral expenses or to the National Autism Association, One Park Avenue, Suite 1, Portsmouth, RI 02871.