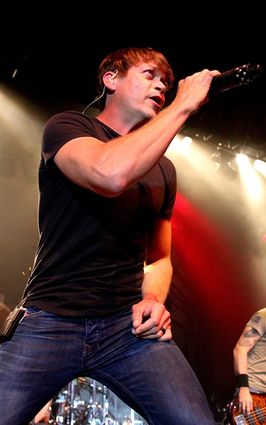 Rockers 3 Doors Down return to the Golden Nugget Casino in Lake Charles, La., for the second time in 20 months as the band concludes its “Back Porch Jam” acoustic tour this Saturday, March 2.

A rock band which is no stranger to music fans in the region is returning this weekend.

Rock act 3 Doors Down returns to Southwest Louisiana this Saturday, March 2, for a performance inside the Grand Event Center of the Golden Nugget Casino in Lake Charles with its highly popular “Back Porch Jam” acoustic tour. Tickets and a limited number of various VIP packages are available online at www.goldennuggetlc.com.

Formed in Mississippi in 1995, 3 Doors Down has sold more than 20 million albums around the world and is best known for hit songs such as “Kryptonite,” “Duck and Run,” “Loser,” “Here Without You,” “It’s Not My Time” and more. The group, which is comprised of Brad Arnold, vocals; Chris Henderson and Chet Roberts, guitars; Greg Upchurch, drums; and Justin Biltonen, bass, is currently doing a mini-acoustic tour and will conclude the tour in Lake Charles on Saturday night.

According to vocalist Brad Arnold, in a recent telephone interview, the band has been performing its highly popular acoustic shows for many years and is something that just came naturally for the group.

“Somewhere along the way in our career, someone asked us to do some acoustic shows and it turned out to be a lot of fun,” Arnold explained. “We write a lot of our songs acoustic anyway, so we basically took the songs back to their roots. A few years back we did our first ‘Back to the Basement’ acoustic tour and it was only supposed to last a few months, but it was so popular it turned into a year.”

After completing its 2018 winter acoustic tour, the band decided it needed to record some of the songs to accommodate fan requests for the material. This culminated with the release of the “Acoustic Back Porch Jam” six-song EP in early February, which is available for download and streaming and arrived just in time for the current tour.

“A lot of people kept asking for an acoustic record, so we finally got off our butts and recorded it,” Arnold said laughing. “People just like music, and our shows have people of all ages in attendance. Our shows are casual and fun, and that is what this record sounds like. We didn’t want it to be a studio record, we wanted it to be like a live show, so we went to our studio and just set everything up and played.”

While life and career are going well for Arnold and company currently, it was not always the case. Various bandmembers have battled their own personal demons with alcohol or substance abuse over the years, but Arnold made a life-changing decision three years ago to stop drinking and to live a better life.

“I wasn’t at rock bottom, but I was down low enough,” he said. “They say when it is time to change it is either obvious to you or you can just be blind to it. I knew how miserable I was and I had people around me who saw me struggling. Chris (Henderson) and Greg (Upchurch) had struggled at one point but were doing better and I wanted to be like they were.

“I could trace every problem I had back to alcohol, so I had to go to rehab to learn to be sober,” he continued. “What I learned was that I did not have a drinking problem, but I had a life problem and used alcohol to deal with it. I’m so thankful to God for delivering me. I have a life now. I wish I had done it sooner because it turned me into a better dude.”

While a new studio album may not be in the immediate future for 3 Doors Down, it’s a safe bet that the group will be on the road. Although a big tour is not currently on the horizon, such as last year’s successful co-headlining tour with Collective Soul and Soul Asylum, the band does have a number of shows on tap.

“I think we will be doing some shows this summer, but it’s not what I would call a full tour,” Arnold said. “If I’m able to come home every couple of weeks and not sleeping on a bus night after night, then it’s not a full-blown tour. But we are planning a big tour in 2020 to celebrate the 20th anniversary of our first record (The Better Life, released February 2000),” he added. “And I think that will be a lot of fun.”

For more information on the band visit www.3doorsdown.com or visit www.goldennuggetlc.com for details about this concert and other events at the Golden Nugget Casino in Lake Charles.