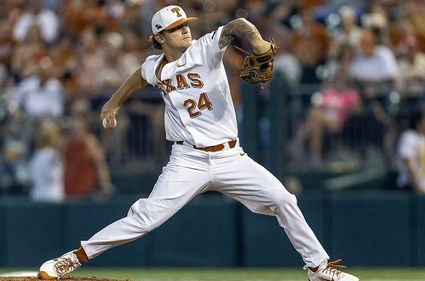 “I go day to day thinking about baseball. My life revolves around baseball. I’m a baseball player and I play baseball.”

The right-handed pitcher, a 12th-round draft pick last June out of the University of Texas, is beginning his first pro baseball spring training camp with the Boston Red Sox at Fort Myers, Florida.

After agreeing to a $125,000 signing bonus, Shugart spent a couple of months in Fort Myers last summer.

He had a good idea what to expect this spring.

“There’s definitely a difference from college life to the minor league grind,” he said, “just like it’s way different from high school to college.

“In high school and college, you’re all team. In professional baseball, you’re in business for yourself while working with a team.”

Shugart will definitely not be working by himself in Florida.

The Red Sox have about 150 pitchers among the 300 or so on their organization’s roster who will be shooting for about 175 roster spots on one of Boston’s seven major and minor league teams.

“They started me out at their spring training complex. I didn’t get to throw as much as I was wanting to. They said I threw too much in college and wanted me to build my arm back up,” Shugart said.

“But it was good to be there and see what goes on. I saw the routine,” he said, “so I’d know what to expect when I get to spring training.”

That routine, according to Shugart, begins with a 6 a.m. wakeup and on-field stretching and calisthenics at 6:30. Breakfast is at 7 a.m. and pitchers’ meetings begin at 8 a.m.

After that meeting, the pitchers get in their throwing, running and weightlifting sessions. Next is a team meeting followed by team defense drills and batting practice, with pitchers throwing bullpen sessions.

And this was all before Gulf Coast League rookie games began each day at noon.

Every pitcher was at every game, even if it was an off-day from pitching.

“If you’re not pitching, you’re in the stands or dugout charting pitches,” Shugart said.

When he got a chance to pitch, the BC grad showed the stuff that helped lead the Longhorns last year to their 78th conference title and 36th appearance in the College World Series.

In mid- to late-August, Shugart pitched in four minor league games – three in a rookie league, the other in a short-season A league – and struck out nine in a total of eight innings while compiling a 1.13 earned run average.

Shugart is expected to be on April’s opening day roster from the Greenville (S.C.) Drive, a team in the low-A Southern Atlantic (Sally) League.

The Sox believe he can be a four-pitch pitcher.

He also has a slow curve and a changeup with some good movement.

Shugart was a relief pitcher his first two seasons for the Longhorns, but switched to starting his final season at UT. He started 15 games, went 6-3 with 69 strikeouts in 95 innings. Overall, he was 11-8 for UT with a 4.33 ERA.

“The Red Sox are keeping me as a starter right now,” Shugart said. “I don’t know what their plans are. I’ll throw what I’m told to throw.

In high school, Shugart was a two-way player, playing on the left side of the diamond when not pitching. He was district MVP and all-state.

“I’ll always take pride in that. I’m just sorry I never got to win a state championship.”