The Greater Orange Area Chamber of Commerce visited Little Cypress-Mauriceville to recognize the Chamber’s Student and Employee of the Month on Tuesday, February 26.

Nyah Patel was selected as the Student of the Month and Angie Eikenhorst was named Employee of the Month.

Angie Eikenhorst was hired to teach kindergarten at Little Cypress Elementary in 1995, which she describes as a “dream come true.” She remained in kindergarten for 10 years and then had the opportunity to teach first grade.

In 2007 she earned her Master Reading Teacher Certification (MRT) and now serves as a reading interventionist for struggling readers in kindergarten and first grade. This year marks her 24th year in education.

In the nomination for Nyah, two LCM High School staff members listed the reasons she should be the Student of the Month. Assistant Principal, Corey Sheppard said, “Nyah is one of those students that you just know will be wildly successful after high school. She is smart, energetic, and driven. Good enough will never be ‘good enough’ for her.”

According to Elizabeth LeBouef, National Honor Society sponsor, “She is smart, a hard worker, great student and all around good person. She is always positive! Nyah is going to become an amazing adult.”

Nyah’s accomplishments during her time at LCM are proof of what’s been said of her previously. She has been a Sophomore and Junior LCM Star Student. She qualified for State in CX Debate 2019, she’s in the top 10% of the LCM Class of 2019, has been on the A Honor Roll all 4 years of high school and was a UIL State participant in Marching Band and Current Events. 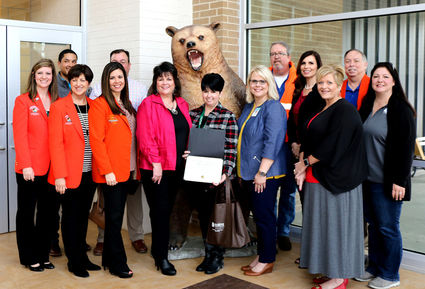 Nyah hopes to attend the University of Texas at Austin in the fall and plans to pursue a degree in law and political science.

Both pics feature the recipient surrounded by Chamber of Commerce Ambassadors and District administrators.