Gwen Boehme has the recipe for lifelong fitness and, at 98 years of age, she knows a little bit about living.

“I grew up in the country,” she said. “I had to pick stuff out of the garden. I took care of a lot of fruit. I helped pick it and can it.”

That, she explained, is why she can spend three mornings a week walking, doing aerobics and lifting weights in a most improbable exercise class at Lamar State College Orange.

“I’m not a bit sore,” says the former switchboard operator who grew up in Anacoco, La., near the present day Toledo Bend Reservoir.

On Monday, Wednesday and Friday mornings they warm up by walking several laps around the gym, then they form lines for stretching and aerobics. Then the class often moves over to a weight room to push a little iron.

Thomas started the class 27 years ago with the help of a three-year grant to study exercise and the elderly.

When the funding ran out, the seniors agreed to pay $59 per semester to keep the workouts coming.

“This is the only program like this in the state,” he said.

And Campbell, who has merged his younger students in recent years, is learning.

“He says his whole idea of senior citizens has changed,” Thomas said.

You can say the same for the millennials in the class.

“The [younger] students are scared of us at first,” says Helen Broussard, 79. “But at the end of the semester, they don’t want to leave.”

“Don has retired, but we don’t want him to leave,” Broussard said. “He’s the heart of the program.”

Roger Boehme, one of Gwen Boehme’s four sons, has been driving his mother to and from class lately, often sitting on the sidelines while she and her friends sweat with the “youngies.”

“Mom laid out a year or two [from the class],” Roger Boehme said. “I don’t think she liked driving up here and trying to find a parking space.”

With 22 years in the class, Gwen Boehme can easily remember when parking wasn’t such a problem at Orange’s downtown two-year college.

She’s one of five seniors who have been taking Thomas’ class for decades.

Gwen Boehme, 98, and Helen Broussard, 79, are both in their third decade of membership in a seniors exercise class at Lamar State College Orange. RECORD PHOTO: Dave Rogers

Along with Broussard, the others are Carolyn Hillisten, 77; Jane Bonnin Jenis, 86; and Jacque Phelps, 90.

“I had brain cancer the first part of March,” Broussard noted. “They said from my neck down, my body was in excellent shape.

“My answer to everything is exercise and good food.” 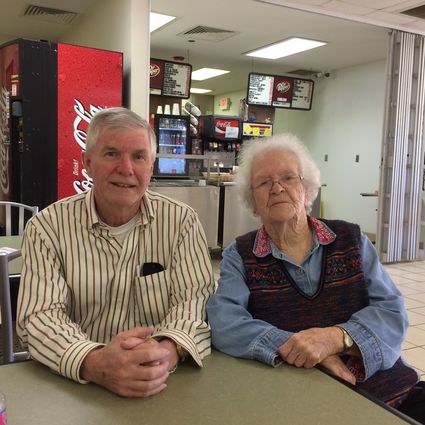 Gwen Boehme lives with her daughter, Sarah Boehme, curator of the Stark Museum of Art. Since retiring, she has been a curator of a sort, helping with her church newsletter.

“I enjoy exercise,” she said. “I just do what I can. It keeps me going, so I can live a few more years.”