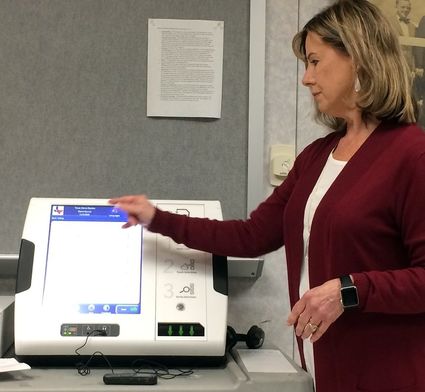 Touch-screen voting is coming to Orange County elections this spring.

Tina Barrow, Elections Administrator, demonstrated how to use one of the county’s 34 new Express Vote voting machines at Tuesday’s Commissioners’ Court.

She and her staff will be conducting similar demonstrations at the Orange Public Library Thursday, Feb. 28 from 1:30 p.m. to 4:30 p.m.

The Express Vote machines will be in place for the May 4 city and school board elections, she said.

“We want to try to teach everybody how to use these machines,” Barrow said. “We will be using the voting machines instead of paper ballots.”

Barrow explained in a January 22 appearance at Orange City Council that the new machines were required to replace outdated machines in use now to help disabled voters.

Provisional paper voting and curbside voting on paper will remain an option, but she wants everyone to use them.

She explained the machines are not DREs [direct-reading electronic machines] that register and count votes without a paper backup. In updating from paper Scantron-type ballots to the Express Vote machines, the Orange County voting records are not connected to a network that can be hacked.

Each voter will present their photo ID at a check-in station like usual, but instead of being handed a specific ballot for each entity (e.g. City of Orange and Little Cypress-Mauriceville CISD), the voter will get a card with coding at the top.

Inserting this card in the Express Voter machine will load a ballot specifically for that voter and their voting jurisdictions.

Choices for each office will appear on a touch screen and the voter will press their selection. After all selections are concluded, the voter will insert the card again and it will print all the person’s votes.

Voters are expected to double-check the printout and if it’s right, put it in the ballot box. If not, a poll judge will destroy that card and the voter can start the voting process over.

When all the ballot boxes are brought to the County Elections office, they will all be run through the same scanner as has been used in past elections, with the results tallied by that scanner.

“It will save money,” Barrow said. “We don’t have to print ballots, and if we have multiple machines at one polling place, we only have to have one set of judges.”

While the change in voting should affect a lot more citizens, the item that got the most attention came when commissioners voted to revise the county’s retirement benefits policy regarding health insurance.

In 2016, commissioners’ court, led by former County Judge Stephen Brint Carlton voted 3-2 to change a policy that let an employee receive retirement benefits from the county with as few as eight years of county service. The change was to put health insurance payments by the county on a sliding scale for those who were eligible for retirement from the state of Texas but had fewer than 20 years with the county.

This affected the retirement plans of a number of county employees.

Tuesday’s vote was largely housekeeping. It only affected those hired after the close of Fiscal Year 2017, Oct. 1, 2017.

They approved a new modular building to be built at 165 East Railroad, Vidor, to replace the Vidor WIC office; and repairs to the Mauriceville Commissioner’s Office and Sheriff Substation.

Both those buildings were destroyed by Tropical Storm Harvey, as was the Vidor Substation. All three projects are to be paid for with FEMA funds.