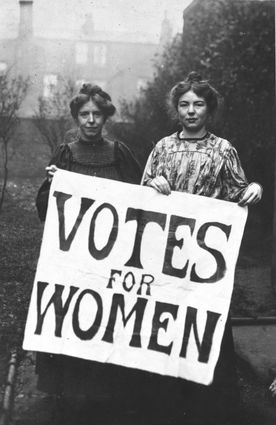 The number "19" is as important to women receiving the right to vote as the number "13" was to the original colonies, or as the number "16" was to the territory of Oklahoma when it became a state on November 16, 1907. Why was this "19" so important? It was on July 19, 1848, in Seneca Falls, New York, that the first women's rights convention was held. Currently, it is the year 2019, the 100th anniversary of the passing of the 19th Amendment to the U.S. Constitution, giving women the right to vote.

Characterizing the independent activity of women, especially those in the younger generation, the New Woman appeared in the late 19th century, moving the woman from the household to public spaces.

The riding of bicycles was a new activity that gave women mobility, rejecting the so-called weakness and fragility of the female.

Eventually, on May 21, 1919, the 19th Amendment was passed in the House of United States representatives, and on June 4, 1919, the U.S. Senate also passed the amendment.

States followed the example of the House and Senate by ratifying the amendment while their state legislatures were in session.

Politicians finally began to pressure local and national legislators to support women's suffrage so that their political parties could claim credit in future elections.

It must be noted that U.S. President Woodrow Wilson played a significant role in Congress passing and ratifying the 19th Amendment, even though the bill took several attempts before passing.

Amazingly, in 1878, Sen. Aaron A. Sargent, a friend of women's rights crusader Susan B. Anthony, introduced into Congress a women's suffrage amendment. It took 40 years before it would become the 19th Amendment to the U.S. Constitution, with few changes in the wording.

Of the necessary 36 state legislatures required to ratify the amendment, only 35 states had ratified it, but after languishing for months, Tennessee narrowly ratified the 19th Amendment on August 18, 1920, making it legal for women to vote in the United States of America. Believe it or not, it was not until the presidential election of 1920 that women were permitted to vote in every state. With women now eligible to vote, politicians decided to emphasize prohibition, child health, public schools, and world peace, all issues they felt women viewed as interesting. Actually, though,

women proved to share the same voting ideas as men on these issues.

The short-lived Populist Party supported women's suffrage, endorsing women in frontier Wyoming Territory in 1869, then polygamous Utah in 1870, Colorado in 1893, and Idaho in 1896.

Some women were able to gain partial suffrage by being allowed to vote for school boards.

As a result, Western states were faster to adopt women's suffrage than Eastern ones.

In 1890, the National American Woman Suffrage Association (NAWSA) was formed.

NAWSA is now known as the League of Women Voters.

Then, in 1916, Alice Paul formed the National Women's Party (NWP), a smaller group than NAWSA, but was known for dramatic and confrontational activities, most often in Washington, D.C. NWP lobbied for equality and the Equal Right Amendment which passed Congress during the 1972 women's movement, but it was not ratified and never took effect.

Many believed that the addition of women as voters would help achieve respective a political party's missions.

In fact, the Progressive Party in 1912, formed by the famed Teddy Roosevelt, endorsed women's suffrage.

(After all, Roosevelt's daughter, Alice, was quite an independent, self-thinking woman herself!) It is true that the socialist movement supported women's suffrage in some areas, as well.

The entry of the U.S. into World War I in April 1917 truly impacted the suffrage movement.

Women were forced to move into workplaces that did not usually hire females, such as refineries and mills (just as in World War II).

Jeannette Rankin from Montana was elected in 1916 as the first woman in Congress, and was among 50 Congressional members to vote against the declaration of war.

The main influx of women voting occurred in 1928. Statistics illustrate that Catholic women were reluctant to vote in the early 1920s, even though they registered in large numbers for the 1928 election, the first election in which Catholicism played a major component. It appears that 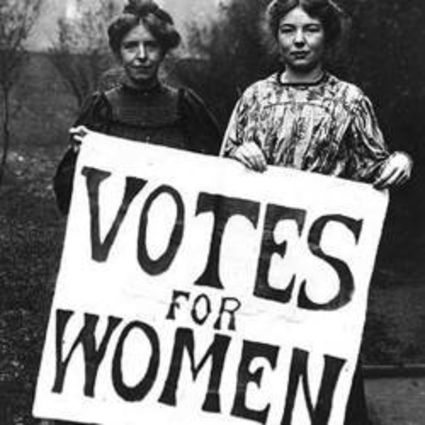 the women's rights movement declined a lot during the Roaring Twenties. However, women taught each other how to vote in the 1930s, by surrounding each other with posters in English, Yiddish, and other languages. Astonishingly, women did not go to the voting polls in the same numbers as men until the 1980s. From the 1980's until current times, women have voted in elections in the same percentage as men or even more. This is known as the voting gender gap where a difference appears in voter turnout and preferences between males and females. Consequently, this has impacted elections and the manner in which candidates campaign.

Obviously, then, the number of women in Congress has grown gradually since 1920, with 23 women in Congress in 1981 to 97 women in 2015 serving in the 113th Congress, with a record 20 female senators and 77 female representatives.

(Some information for this story was retrieved from Wikipedia, "Women's Suffrage in the United States.")