You’re Never to Old to Become Your Best Martial Artist 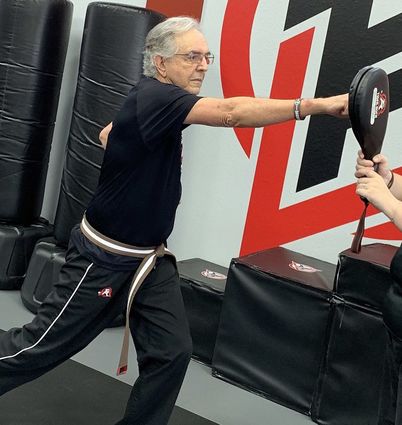 The question most people ask Chris is why? Why did he decide to train in martial arts? Well, he was retired and keeping himself busy on the computer and found his lifestyle had become pretty much sedentary. He needed something to do so he started looking at local fitness centers in hopes he would find something that would suit his fancy. But everything he tried …treadmills…exercise bikes… and the like he found boring.

So one day he was attending a grade school event for students and parents with his granddaughter. The demo team from Tiger Rock Martial Arts of Bridge City was demonstrating and handing out free passes for an introductory lesson. So he said to himself, “Self, let’s go see what it’s all about.” That was all she wrote, He enrolled as a student and has been really enjoying it since then.

“Nobody is every too old!” states Chris. “It is a great form of exercise, and then some. Plus you meet a lot of very interesting, clever and dedicated folks. Not to mention all of the pluses for your body and health becoming stronger as time goes on.”

In his four years with Tiger Rock Bridge City, he was ‘out of action’ with accidental injuries (he states they were self-inflicted). Yet, he really feels he learned something from the experience. Bottom line is he’s still training.

His motto has become “ Never Give Up! “ “I will be doing this until they are throwing flowers on my box.” says Mr. Line emphatically.

Since Chris Line began training his three goals have been 1) to get stronger, 2) to increase his cardiovascular ability and 3) to learn to defend himself. He has been successfully achieving these goals for the past four years.

Chris is proof positive that you are never too old to train in martial arts. Tiger Rock Martial Arts of Bridge City has the ability to put together a program that fits your needs. Mr. Line asks that you contact Tiger Rock Bridge City so that you too can check it out . “You just might change into someone else that you never imagined. I did!” states Chris.