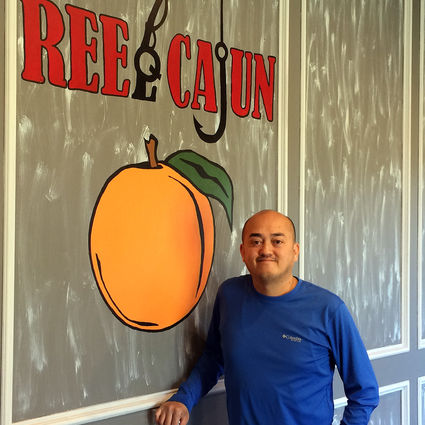 Photo: Tony Nguyen is set to open Reel Cajun Seafood and Bar at Orange's Sunset Grove Country Club this spring. The restaurant menu features a "mashup of Asian and Cajun" flavors, according to Nguyen.

An Orange dining and party destination since the Roaring 20s has gotten a new owner and overhaul and is poised to announce its grand opening this spring.

Tony Nguyen, who formerly worked in the kitchen at Esther’s Seafood in Port Arthur, says he will announce the ribbon-cutting date for Reel Cajun Seafood and Bar at 2900 Sunset Dr. at the end of this week.

He says Reel Cajun, which already has locations in Port Arthur and Lumberton, is a come-as-you-are eatery that offers “Elevated Cajun Food,” a fusion of Asian and Cajun flavors.

“We serve mainly seafood, but we also have steaks and burgers for our non-seafood lovers,” Nguyen said.

Its Orange location is the former Sunset Grove Country Club clubhouse which the Port Arthur native is leasing from country club owner-members.

But Reel Cajun Seafood and Bar, owned and operated by Tony and Stephanie Nguyen, is taking over the dining and banquet end of the club’s facilities.

“I came to Orange a long time ago for some business, but I never knew this was back here,” Nguyen said of the club.

“This property is kind of valuable.”

The property first opened as the club’s dining and party-hosting clubhouse in the 20s and has been twice rebuilt. Once, after a fire in 1959, and again, after Hurricane Rita in 2005.

The restaurant still boasts magnificent views of the golf course to the east and the setting sun to the west.

Nguyen added a gazebo when he enlarged the patio deck on the north side, one that overhangs Adams Bayou and offers a great view of the golf course’s closing holes.

“We’re looking to have live music on the patio,” he said. “And we have two rooms to cater to banquets. We’re just an amped-up restaurant.”

“I’ve worked everywhere,” Tony Nguyen said. “I remember going to work Sunday mornings at Esther’s. I really miss the Benoits [owners]. They taught me so much.”

“We use a lot of garlic in our crawfish. We call it our house garlic sauce. I make all of my own seasoning.”

He’s put a unique spin on other popular dishes as well.

“Our top-selling appetizer is Cajun egg rolls, something I came up with. It’s boudain in an egg roll.

“We serve a lot of fish, a lot of oysters and crabs. The majority of our menu is a little Cajun mashup.”