The fish filets are golden, the bottom line divine.

The Knights, a Catholic service and fellowship organization, sell a box of fried fish, French fries, cole slaw and hush puppies for $10 on Fridays through April 12 out of their hall at 770 Avenue A.

Dine-in or take-out meals are served from 10:30 a.m. to 1 p.m. at their location next to St. Henry Catholic Church on W. Roundbunch Road.

Michelene Moody, left, and Sue Pritchard, of the Ladies of St. Henry Altar Society work the cake counter at the Knights of Columbus Fish Fry Friday March 8 in Bridge City. The women sell slices of cake for 50 cents each to fund altar candles, linens and vestments for priests and altar servers at St. Henry Catholic Church.

Catholics are required to abstain from eating meat on Fridays during the season of Lent, the 40 days before Easter, in acknowledgment of the sacrifices of Jesus.

Darrel Latiolais is the Knights of Columbus Advocate heading up this year’s Lenten Friday Fish Fry in Bridge City. Approximately 75 volunteers per week cook and serve up $10 fish lunches on Fridays through April 12 as a fundraiser for KC charities and the Ladies of St. Henry Altar Society.

Advocate Darrel Latiolais said Council 3406 set a record of 630 dinners served on one day in 2018. That record was in serious jeopardy as 1 p.m. neared Friday, March 8, the first of the event’s six weeks for 2019.

A crew of about 75 men and women volunteer each week to run the operation, he said.

Besides members of the Knights of Columbus, the annual effort is assisted by Knights’ spouses and other church members.

Latiolais has lost track of whether this is his fifth or sixth year in charge of the big doings.

“It kind of fell into my lap five or six years ago,” he said. “We’ve got plenty of workers, but nobody else wants this job.”

Server Lucy Simpson prepares a to-go fish dinner at the Knights of Columbus Fish Fry on March 8 in Bridge City. The weekly fundraiser runs from 10:30 a.m. to 1 p.m. on Fridays through April 12.

He says sales average about 500 dinners per Friday and half of them are to go. About 25 percent of meals are deliveries. 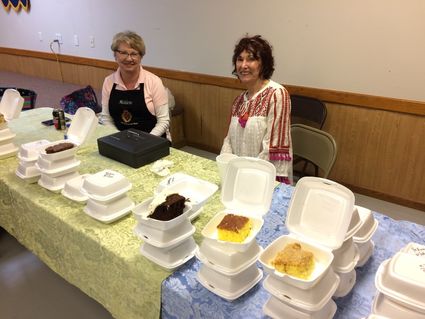 “We do other fundraisers – ribs, meats and hams. We have a nice pit we do a lot of cooking on,” Latiolais said.

“But this is our biggest fundraiser by far.”

With the exception of the desserts, all the events proceeds go to KC charities like Orange Christian Services and the Orangefield-Bridge City Ministerial Alliance.

The Ladies of St. Henry Altar Society take the profits from their dessert sales to purchase altar candles, altar linens and vestments for priests and altar servers.