Be wary of fanatical women totin’ rifles. You could wind up dead.

Participants dined on a barbecue dinner catered by Tuffy’s Eatery featuring brisket, chicken and links, with Cajun rice and green beans while a western extravaganza took place around them.

Elyse Thibodeaux played the wannabe gunslinger youngster, Joey Starrett. Joey was always looking for some excitement and thought it was coming when he heard a famous outlaw was headed to town. To his disappointment, Sheriff John Ford, played by Barry Foster told him he knew the gangster was coming…to spend a short stint in the town jail awaiting transport. His visit was very short. The gunman turned up dead in his jail cell.

Who dunnit? Was it the Parson Graham played by Michael Hanneman Jr., who was watching the prisoner? Maybe it was the teacher Miss Crabtree, played by Rani Dillow, who was intrigued with more than the thought of a history lesson.

Doc Watson, played by Eric Andrus was more interested in spending time at the saloon with bar maid/entertainer, Sadie Mae Harlow, played by Caitlin Pridemore. Who was The Stranger, played by Alex Edgerly, lurking in the shadows? What were his intentions?

William James, played by Kevin Mott, blew into town at a suspicious point in time. Known as “Kid Vicious,” he said he was just in town for a game of chance and a drink. As a retired gunslinger/gambler, he knew the prisoner.

Joey confessed to the crime, because he heard the gunshot go off as he pulled the trigger on his finger gun in his pretend showdown.

But the guilty party was the near-deaf head of the Women’s Chamber Society, Mrs. Peacock, played by Brandy Slaughter. She was a bit fanatical about getting rid of the evil elements in town, but this was an accident. She was shooting at somebody in the shadows and the gun ricocheted through the jail cell window. 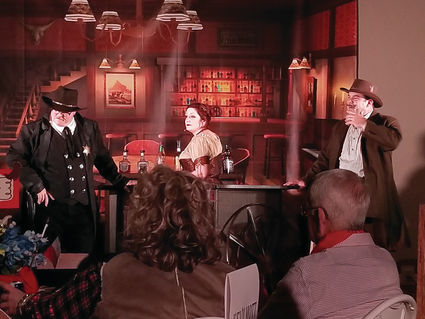 The crowd enjoyed the performance, but seemed to get the biggest kick out of the instances where the actors forgot their lines. They didn’t try to hide it when they slipped up and the audience howled. The cast’s four months of practices paid off.

Andrus did an amazing job on the set with a saloon on the stage, including swinging doors and a fence. He created a jail on the other side of the room from foam. There was also a road sign in the middle.

A best dressed male and female was selected from the audience that dressed in their best western garb. Whitetail Construction won the table decoration contest.