He said it last week during a ceremony celebrating the granting of a historical marker by the Texas Historical Commission.

“You guys started the trend,” he said to “angels” Carrie and Ron Woliver and members of the Friends of Orange Depot among a group of 50 or so at the depot Thursday, March 7.

“I don’t know if you realized exactly what you did by restoring this train depot: You began a positive movement that has started to restore the city of Orange.

“When you guys were knocking on doors and asking for donations, people thought you were crazy: ‘You are not going to raise a half a million dollars to fix an old train station.’

“You knew what you wanted and you made it happen.

“And believe it or not, I truly believe this was one of the beginning stages that has pushed us into the positive movement that we’re seeing today.

“People who used to say, ‘No, it’s not possible,’ are now saying, ‘Yes, it’s possible.’ People who did not believe are wanting to work together.”

Jerry Pennington, chairman of the Orange Historical Commission, describes the history of the Orange Train Depot as vice chairman Betty Harmon looks on.

Jerry Pennington, Orange municipal judge and chairman of the Orange Historical Commission, headed up the effort to attain the historical marker.

It was the 92nd to be located in Orange County.

To qualify, “the building has to be at least 50 years old, has to be reestablished to its original condition and has to have historical context. Then a 15-person committee has to review and approve the application,” Pennington said.

He opened the 25-minute program with a history of the depot, which served Orange and Southern Pacific Rail Company on its route from San Francisco to New Orleans from 1908 to 1974.

“But they never could’ve known the future of this building,” he said. “There was no way of knowing that in six or seven years that World War I would explode and families would bring their sons down to this station to go “over there” to fight in France.

“They couldn’t have known about the Roaring Twenties, bootleggers and gangsters, or the economic implosion called the Depression.

“People became hobos and would stand not far from here, around the corner from the station, to hop a freight car to take them somewhere else people could help them.

“Then there were more troop trains to go overseas to fight in World War II. This building has seen all sorts of history.

“What’s exciting is that it’s going to be here for a long time. And hopefully this [marker] will inspire people to learn more.”

Woliver, a 1959 graduate of Orange Lutcher Stark High School, grew up a couple of blocks from the station and wrote a book in 2012 bout its importance to her family.

Betty Harmon, vice chair of the Orange Historical Commission, worked at the nearby Chamber of Commerce offices after the depot was out of service and in disrepair.

“I’d look over here [at the vacant depot] and say, ‘Someone needs to do something about it,’” she recalled March 7.

“Fortunately, we got an angel.”

Woliver and her husband, Ron, purchased the building and donated it to the non-profit Friends of Orange Depot and its members raised $500,000 to begin restoration of the building.

Carrie and Ron Woliver, who purchased the Orange Train Depot off the scrap heap and helped create the non-profit that restored and operates it, peeled away a soggy Texas flag to reveal the marker noting the depot as a Texas Historical Landmark.

After Spears delivered a proclamation from the City of Orange making March 7 “Orange Depot Day” in the city, the Wolivers unveiled the marker making the depot a Texas Historic Landmark.

“From 1908 to 1974, the Orange Train Depot served Southern Pacific Rail Company cars passing through Orange. Prior to this time, transportation by road and on water was unreliable and unsafe, which inhibited the growth of Orange.

“However, the late 1850s timber boom in Southeast Texas contributed to the need for a train depot to export Orange’s raw materials to other parts of the country. The Orange station was just one of the many stops on the through line between San Francisco and New Orleans.

“As racial segregation was still in effect at the time of the depot’s construction, arrangements were made for two ticket windows, two waiting rooms and two restrooms for white and black passengers. In the early 1960s, a large wall dividing the black waiting room and the baggage/freight area was removed. 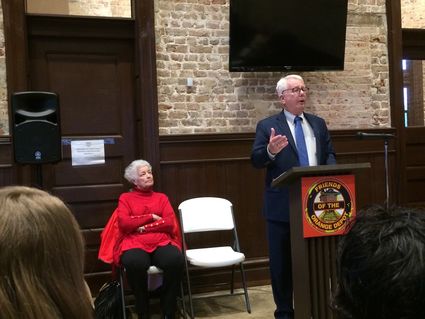 “After the train depot’s closure in the 1970s, various entities intermittently used the building until a fire in 1990 damaged the roof and interior. But the brick walls and interior walls were undamaged. The train depot remained abandoned until 2013, when a local non-profit group raised the runds to restore the building to its original condition.

“Work crews built a new roof on the structure, exposed the cross-hatched windows on the second story and returned the building to its original brick color and green trim. The restoration efforts allow the historic train depot to be enjoyed by Orange-area citizens and visitors alike.”