THE SPAWN IS ON 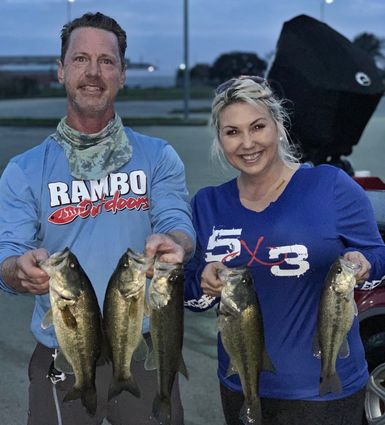 Bend,” asked the young man standing at the counter with his son in tow

and a basket full of spinnerbaits and crankbaits.” The clerk just

shrugged his shoulders and responded, “Cash or credit.”

The answer should have been, “If you are still waiting you are already

late!” Shallow is a relative term that depends on the size of the bass

you hope to catch.Taking advantage of the spawn can equate to the

best shot at the bass of a lifetime.

Seldom if ever, however, can you expect to reap the benefits of both in

the same depth of water.Easily, the most enjoyable aspect of the spawn

intruders on inside moss breaks in one to three feet of water.The

unusually off-colored water has, however, limited this approach somewhat

thus far, but those fish are still there.

As a rule, the bragging size fish are not there however, and more

importantly, are not ever going to be there.That is why the angler that

of water to be shallow.A significant portion of those coveted ladies

will move no shallower for the annual ritual.

grass or deeper into the confines of a flooded bush, but there will be

no retreat to deeper water at this point.If catching a trophy bass is

Trap out of the moss on a shallow flat.For my money, however,fishing the

Todd for a solid week of fishing Sabine Lake.“It has been cold in

“I was disappointed that we never found the trout,” reported Simon, “but

worms.The water looked really yucky, but it was still fun!”

pounds.Trey said the fishing was tough, but they still managed to get it

While on the subject of spinnerbaits, I didn’t ask Trey about color or

choice of blades, but we have done far better of late on both reds and

specks with a quarter ounce spinnerbait as well.We are using Sea Shad

bodies in a couple of colors, but there is no doubt that the fish have

been more interested in a single smaller Colorado blade.

You don’t move much water with a blade that small, but larger blades, as

well as Willow leafs, have just not produced as well fishing the same

stretches of shoreline.Shad bodies are a salt water thing and I believe

a skirt would work just as well.River bass are still Plan B for us.

Things are shaking and baking at the S.A.L.T. Club in spite of the tough

bite on Sabine as the club just announced a new tournament series.The

first team tournament of the year will be hosted out of the S.A.L.T.

This is a team event with a $200 entry fee per team.Each team can weigh

in two trout and two redfish and you do not have to be a S.A.L.T. Club

member to fish.On March 17^th the club will host its member only event

For more information or to sign up call or drop by Outcast Tackle in Groves.