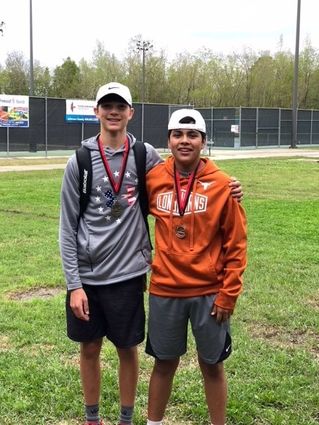 At the Kirbyville Varsity Tennis Invitational held at the Beaumont Tennis Center, the Bridge City Cardinals continue to rack up the medals. Kian Perry, who usually plays doubles with his brother, decided to play singles while brother Camden enjoyed his spring break. Kian fought his way thru the Boys Singles bracket playing five matches without dropping a set. He defeated Colton Haines from Kirbyville in the championship match 6-3;6-3.

Pictured with Kian is teammate Alberto Munguia who captured the consolation medal in the Boys Singles defeating a player from Warren 8-0 in the finals.

In Girls Singles action, Waverlee Cooper continues to dominate. Cooper was impressive in her battle to reach the finals. She defeated a very strong player from Kirbyville 4-6;6-1;6-0 in the championship match. The Bridge City Cardinal Tennis team will compete in the Ms. Sheila Varsity Invitational on March 22 at Lamar University.