Fried or baked, St. Francis has the fish

Photo: Knights of Columbus members Max Staudt and Scott Rollins dish up the peach cobbler during the Lenten Fish Fry at St. Francis of Assisi Catholic Church Friday, March 15. The Friday events will continue from 5 p.m. to 7 p.m. through April 12.

Her membership is at Orange’s St. Mary, but Nelda Beadle’s Friday nights during Lent belong to St. Francis of Assisi Catholic Church.

Beadle and her son, Ernest, never miss a chance to eat the Fish Dinner prepared and served from 5 p.m. to 7 p.m. on Fridays by Knights of Columbus Council 13825.

“We’re here every Friday,” Nelda said, “and we usually bring the rest of the family.”

“We’ve been coming for three or four years,” Ernest Beadle said. “We try to make every Friday.”

The Knights of Columbus, a Catholic-based fraternal organization whose main game is raising money for charity, has been at St. Francis, 3400 Meeks Dr., since Council 13825’s founding in 2005.

Scott Rollins, the Post Grand Knight, says his group has more than 100 members who look forward to providing a meatless meal on Fridays during Lent through April 12.

Catholics are required to abstain from eating meat on Fridays during the season of Lent, the 40 days before Easter, in acknowledgment of the sacrifices of Jesus.

“We just do this as a service to parishoners, though it’s open to anybody who wants to come,” Rollins said.

“We do have quite a few Protestants come here.” 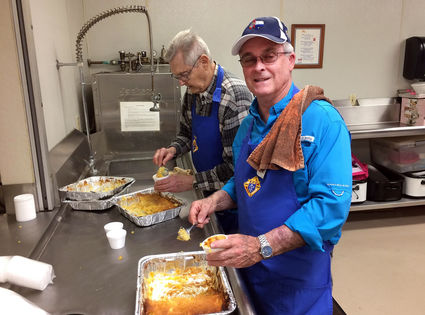 At St. Francis, you can get your choice of fried fish or baked fish, with two filets, hushpuppies, French Fries, cole slaw and dessert for $8.

“Frying and baking is a little extra work,” Rollins said, “but it’s nice for the people.”

About two dozen KC members and volunteers cook for about 250 people per week, Rollins said.

Dine-in or take-out meals are served.