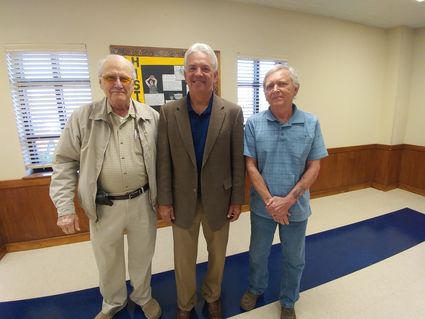 Orange County Commissioner John Gothia of Bridge City, center, tells the members of Orange Golden K Kiwanis on Wednesday, March 20, that Orange County is only one of a few counties in the state of Texas whose Commission meets once per week.

While speaking in the GK Kiwanis venue of the Salvation Army Building on MLK Drive in Orange, Gothia says that the Commission will most likely return to meeting dates of Tuesdays next year rather thanWednesdays due to the local newspapers going to press onTuesday evenings, publishing on Wednesdays.

At left, is Reid Caruthers of Orange, GK president, while Arnold Proellochs, also of Orange, GK member, stands at right, both ready with questions.

The Commission also hopes to appoint an interim judge upon the sudden resignation last week of Judge Dean Crooks.