By Anne Payne The Record

Caelum Segura, 9, attends Bridge City Intermediate School in BCISD (Bridge City Independent School District) as a third grader, but encountered a special experience during his recent spring break in Austin, Texas, by serving as a page in the Texas legislature. Caelum's maternal grandfather, Col. (Ret.) Peter Flores, elected in late 2018 as the first Republican senator from his area since Reconstruction, was chosen in a special election to serve as the State Senator from the 19th Senatorial District.

Previously serving the southeast Texas area many years ago, Flores served as Head of the State Game Wardens under former governor Rick Perry, but Flores retired in 2012. Flores, '83, and Perry, '72, are both graduates of Texas A&M University. At a Texas A&M football game during the fall of 2018, Caelum and his family were invited to the Chancellor's Suite at Aggieland by Aggie alumni John Sharp. Caelum is already thinking about possibly attending Texas A&M due to his excellence in academics. Caelum has a special love for animals, especially a Boxer dog and a cat, and there is a veterinary school at Texas A&M.

Caelum, whose name is from a constellation and is Latin for the word "chisel," lists as his favorite subjects Reading, Science, and Social Studies, and names his least favorite subject as possibly Math.

He plans to run in this year's Bunny Run in Bridge City, sponsored by the Bridge City Rotary Club, with his parents, Mark and Christina Flores Segura, also participating.

Dad Mark is a process operator in an area chemical plant, while Mom Christina is finishing her last year of college at Lamar University, Beaumont.

The Segura family has lived in Bridge City 10 years.

They also have another son, David, a seventh grader in BCISD.

Caelum loves books and collecting rocks, and he plans to participate in the Summer Reading Program at the Bridge City Library. James Patterson is one of his favorite authors, such as in "The Diary of the Wimpy Kid" series. If isolated on a desert island, Caelum says he would take the series of Harry Potter books with him. Caelum is proud of the fact that his dad's family is one of the founding Spaniard families of New Iberia, Louisiana, while his mom's family hails from a Christian family in Mexico, which is native to the South Texas area that was once Mexico. 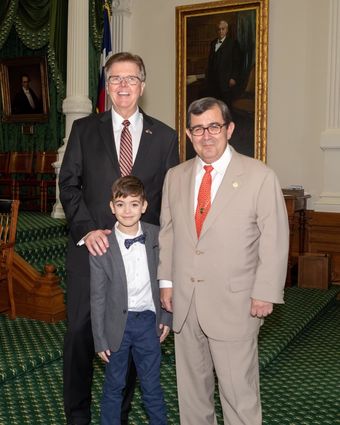