If you buy in, they will come and build it.

And it depends on who’s paying and how much.

“I think the state Legislature is looking at some funding opportunities, so it’s not all held up to the counties that are going to participate,” County Judge Pro-Tem John Gothia said. “They know we don’t have that kind of money.”

Originally, Orange County was to pay 35 percent of the $1.9 billion cost -- $665 million -- an impossible amount to raise for a county with a $45 million annual budget.

“We’ve heard that they’ve got some other options that now cover the majority of the cost,” Gothia said.

Corps and Texas General Land Office (GLO) officials provided updates on the project and others Tuesday.

“When we were at Golden Triangle Days, there was discussion that the GLO was willing to put up some of the counties’ match,” Gothia said, referring to a February visit with state officials in Austin.

“One of the reasons we’re going to Galveston is to find out where we’re at.”

Congress’ Bipartisan Budget Act of 2018 authorized $4.9 billion for the project, which includes repairs and improvements to systems of levees and seawalls in Brazoria and Jefferson Counties. Orange County protection was added to the planning that began in 2001, was halted in 2009 and restarted in 2013.

It is currently in Phase 1 – land and right-of-way acquisition – according to Gothia.

“The total project has three separate elements: Port Arthur, Freeport and Orange,” Eduardo Irigoyen, project manager, said in a phone interview. “Orange is the highest [most expensive] of all three areas because it’s a brand new system.” 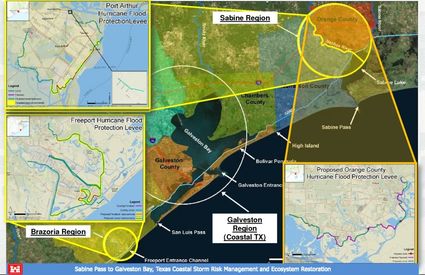 It will extend 27 miles with levees and floodwalls ranging in height from 12 feet to 17 feet, 5 inches. It would include seven new pump stations, 56 drainage structures and 32 closure gates (including one each for Cow Bayou and Adams Bayou). The Mega Project is already in the design phase.

Construction is slated to begin a year from now, in the spring of 2020, and be completed by the middle of 2026.

“Together, we are moving ahead now that appropriations for studies and projects for construction are in place,” said Edmond Russo, Ph.D., the District’s deputy district engineer and programs and project management division chief.