Little Cypress-Mauriceville Coach Steve Griffith added another bauble to his trophy case Tuesday night, being honored for winning his 600th game as a coach.

More than a dozen former players and coaches joined the coach and Bears players on the third base line for the National Anthem.

Griffith thanked his “amazing wife” Lana, three children, Morgan, Sydney and Gage, and his parents, John and Gail Griffith for their support.

He thanked the LCMCISD Administration for its continuous support. And he spread the thanks to his “many assistant coaches along the way,” offering special thanks to long-time assistants Wayne Stephenson and John Martin and his current varsity assistant Hunter Hagler.

He thanked all his former student managers and all the approximately 200 players that he coached.

Griffith took the field Tuesday night at Don Gibbens Field with a career record of 601-250, having picked up his 600th win as a coach last week, 5-3 over Bridge City.

In 25 full seasons as head baseball coach – all of those in charge of the Bears baseball program -- the 1983 LC-M grad has guided 20 teams into the playoffs, seven to the regional finals and one, the 1996 team, to the state tournament.

“Griff” was a member of Coach Vince Buffamonte’s 1982-83 district champions, the first boys to be district champs in any sport in school history. 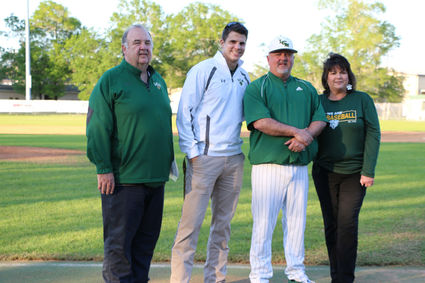 A decade later, Griffith was the assistant coach in Hooks, Texas, when that team won the 1993 3A state championship.

Griffith began his head coaching career the next season at LCM. His third Bears team reached the state championship game and his 1997 team made the regional finals before its season ended.

The Bears have a playoff record of 67-38 (64 percent) under Griff. More than half of his 200 graduating seniors have signed college baseball letters of intent and a half-dozen Bears have been picked in the Major League Baseball draft.