Thibodeaux served as County Judge in Orange for 20 years, 1995 through 2014, before retiring.

How long he’ll serve this time around seems up in the air.

While the motion by County Judge Pro-Tem John Gothia was “to name Carl Thibodeaux to fill the remainder of the term until December 31, 2020,” both Thibodeaux and Gothia refused to rule out Thibodeaux stepping down earlier.

After court adjourned Wednesday, Thibodeaux asked Kurt Guidry, county maintenance director, if he got a new photo on the wall for serving another “three, four, five months” as judge.

“We want to make sure he’s healthy. However long he wants it to be, is going to be fine with us.”

Many expected Gothia to be named county judge at the March 19 meeting and he admitted he wanted it. But procedural rules nixed that.

By law, Gothia would have to resign his job as commissioner for Precinct 3 before being appointed to the judge’s job. It takes a full court of four commissioners to name a replacement judge and with less than a full court, only the “sitting” county judge, which would have been Crooks, could appoint Gothia’s replacement.

“Speaking for myself, I’m perfectly fine being a commissioner,” Gothia said.

“But if the opportunity arises and that [retiring before the end of 2021] is what he chooses to do and then I step up to be in position for that role, if they so choose, then we’ll take that step when the time comes.”

Thibodeaux’s appointment was voted on after a 45-minute closed door meeting of the commissioners and their legal counsel, Denise Gremillion.

“We talked about some of the names that had come up as possible replacements and some of the comments we received from different people in the community,” Commissioner Johnny Trahan said.

“We thought about it and we made what we thought was the best decision.”

Thibodeaux wasn’t the only “old-timer” to be considered.

“We really tried to not go to somebody from outside and bring them into this,” Gothia said. “They’d drown immediately and that’s not fair to the county.

The county must agree on its 2020 budget by the end of September and it’s expected to be a tight one, with county buildings and roads still needing repair after Hurricane Harvey. FEMA reimbursements for those infrastructure repairs are not expected soon.

Twice Wednesday, Precinct 2 Commissioner Theresa Beauchamp complained that she still has no office after three months on the job and Guidry explained the county was awaiting FEMA “mitigation” payments to raise the elevation of the Mauriceville site before the county rebuilt the office.

Thibodeaux has overseen the creation and passage of 20 county budgets.

“I don’t know what the finances are now,” he said. “But people need to get used to this: Counties don’t make a profit. Counties are like a valley and a mountain. 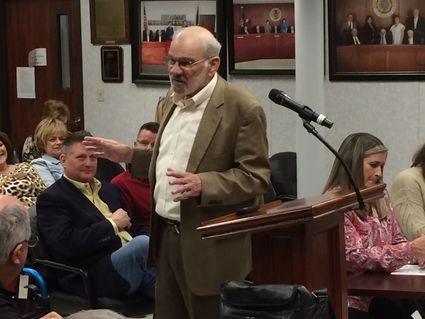 “You’re going to be at the top of the mountain one year and doing fantastic. Then bingo, something happens and all of a sudden the next year you’re down in the valley of the dump.”

The new judge is hopeful of being sworn in in time to preside over the next commissioners’ court meeting, next Tuesday at 1:30 p.m.

Asked how long he planned to remain judge, Thibodeaux said, “I don’t know yet. We’ll play it by ear.

“If somebody comes up and really wants to be county judge, that’s fine with me. Right now, all I know is I’m going to be the judge for a while and I’ve got things to get done.”